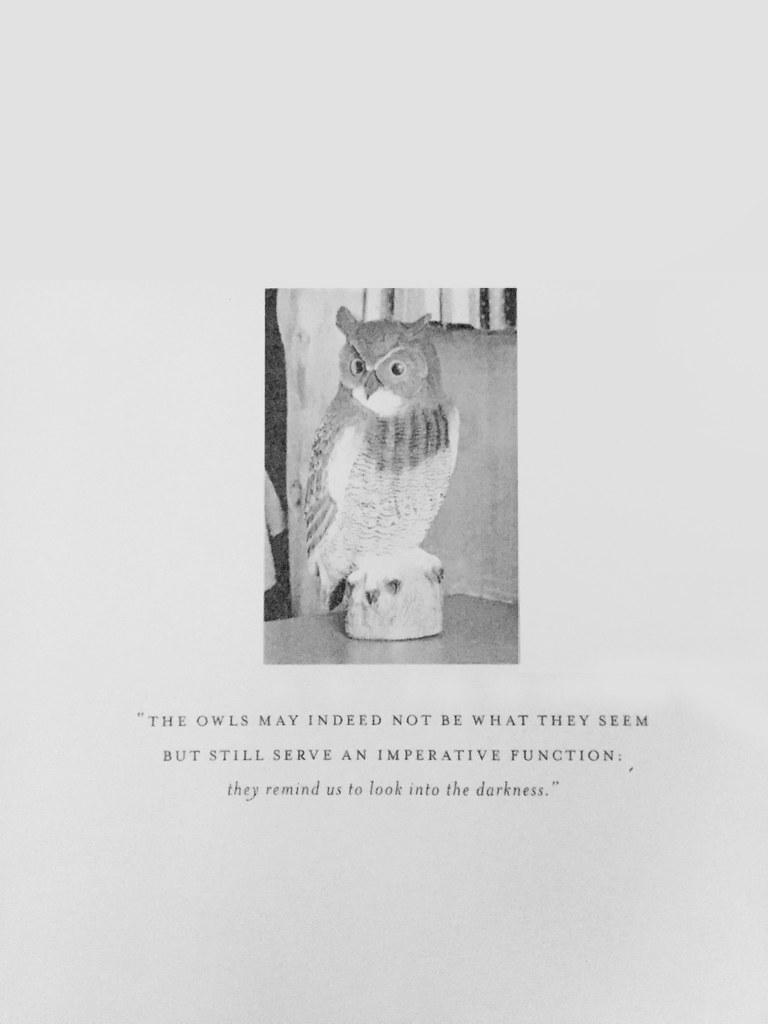 From The Secret History of Twin Peaks, A Novel by Mark Frost 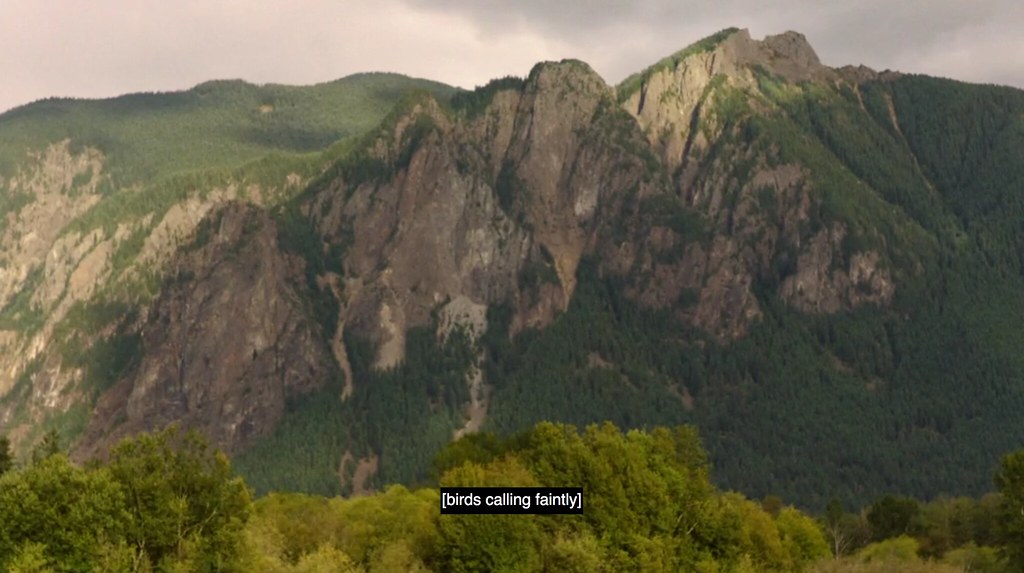 Mark Frost and David Lynch - Twin Peaks - 2017
From Part One

Recurring establishing shot for the environment of Twin Peaks. First shot we see after Cooper has his discussion with ???????? in Part One.

The above quote is from Colonel Douglas Milford, in an encrypted message to Major Garland Briggs. Briggs' response is the words "seared his soul". Briggs is revealed earlier as "The Archivist". His presence in the new series is quite strong, more discussion on this forthcoming.
Posted by the art of memory at 11:34 AM No comments:

A film with virtuosic construction. In addition to Nolan making it one hell of a film with his vision, writing and direction; the following people (and many more) had much to do with the look and sound of the film and the extreme pleasure it was to watch.

Posted by the art of memory at 7:37 AM No comments: 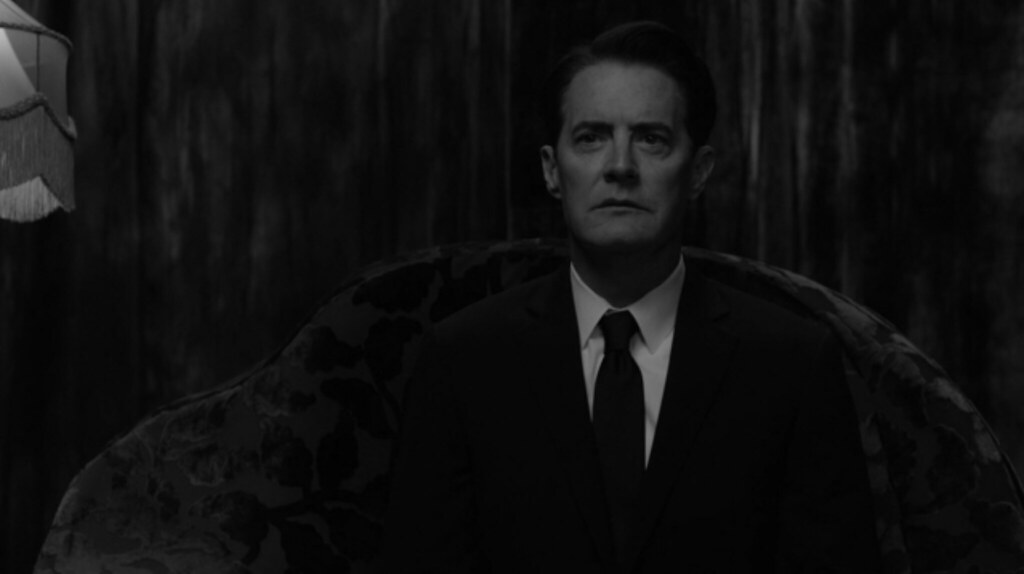 Mark Frost and David Lynch - Twin Peaks - 2017
From Part One, Introduction of an essential element in the new Twin Peaks : electricity 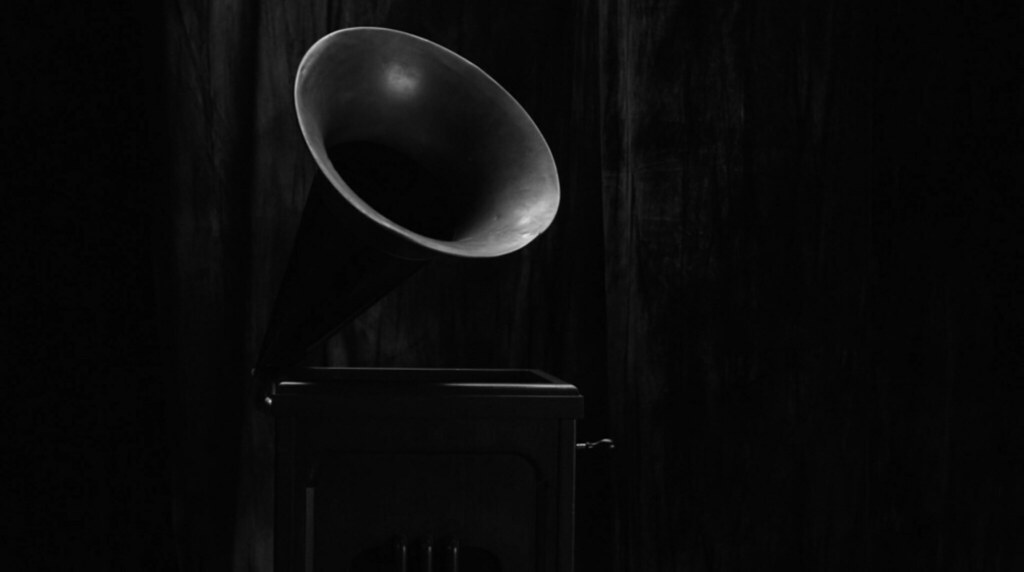 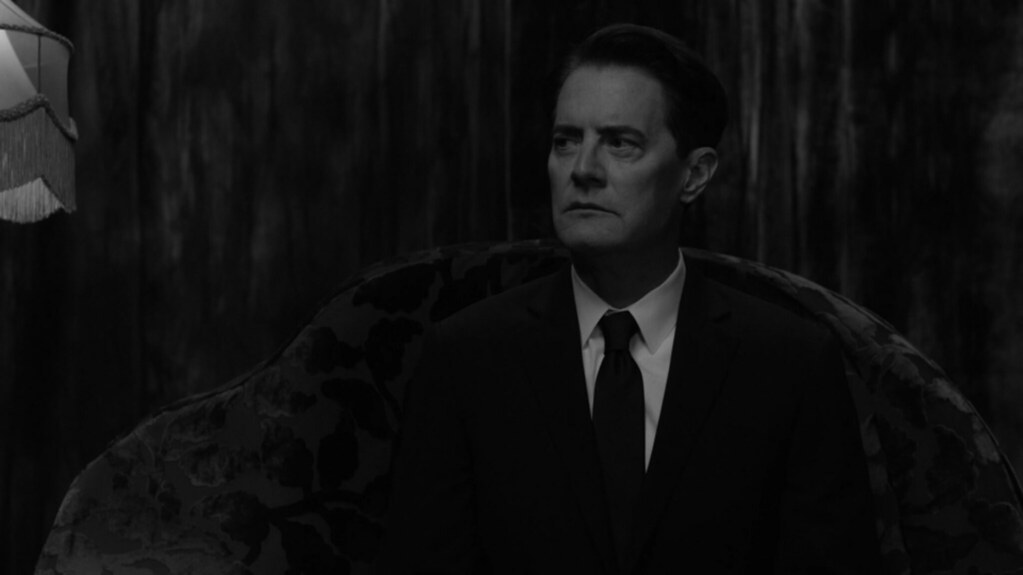 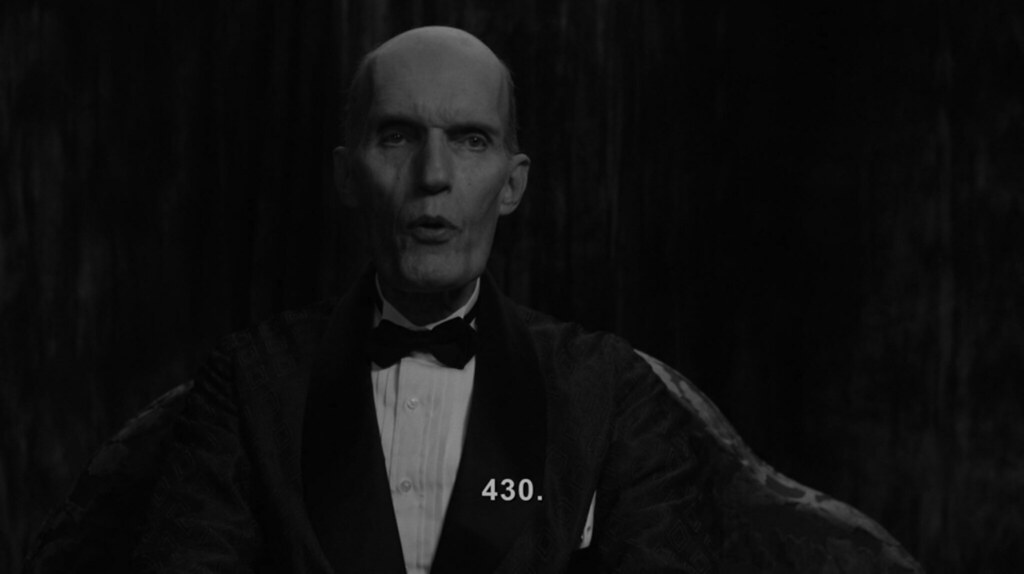 Cooper is with the Giant (or ????????), played by Carel Struycken, in a backwards space; similar but most likely not the Black Lodge. The giant has been seen previously in another form, as the Room Service Waiter of the Great Northern Hotel (played by Hank Worden, the great John Ford actor, the Shakespearean fool who only longed for "a roof over his head and a rocking chair by the fire.").

Different from the Black Lodge which is red, this space is black & white. Initially when seeing the Black Lodge in the 90s, this viewer was struck by the method Lynch achieved the oddness of these scenes.... having the actors go through the lines backwards and then playing them backwards so they appear forwards (image and sound). The glitches and imperfections became quite striking from this technique. Here in the phonograph scene, the backwards technique is present. The backwards technique is truly one of the most unique and otherworldly techniques in film history.

In this scene one observes the phonograph crackling... it is more an electrical crackle rather than the sound of a a needle on a record. These electricity sounds continue through the series. Here the sound mimics crow caws.

Cooper listens to the electricity.....

The sounds are followed by the Giant saying "Agent Cooper. Listen to the sounds (electricity loop). It is in our house now. It all cannot be said aloud now. Remember … 430. Richard and Linda. Two birds with one stone.” 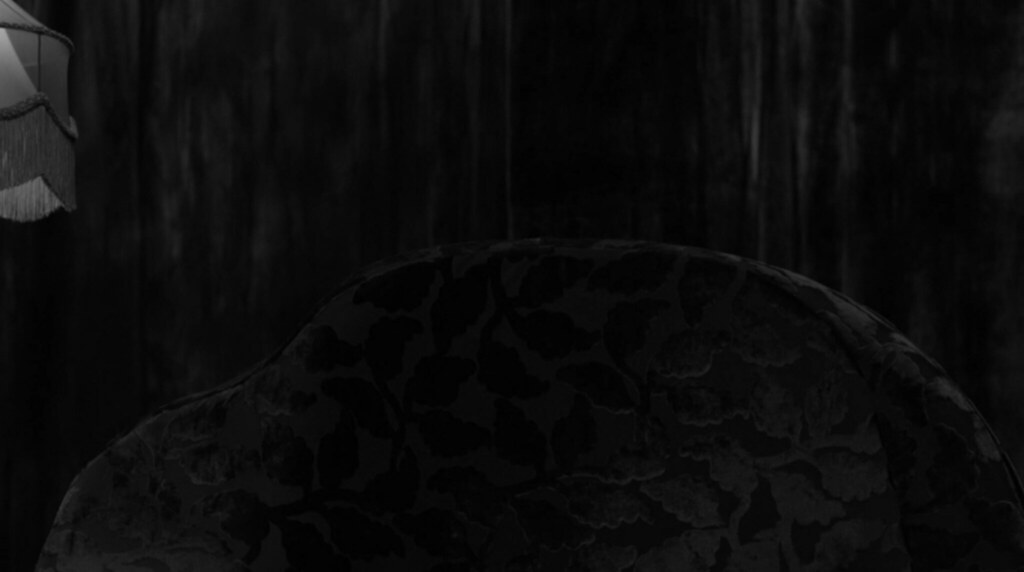 The electricity continues to crackle and Cooper crackles into disappearance. 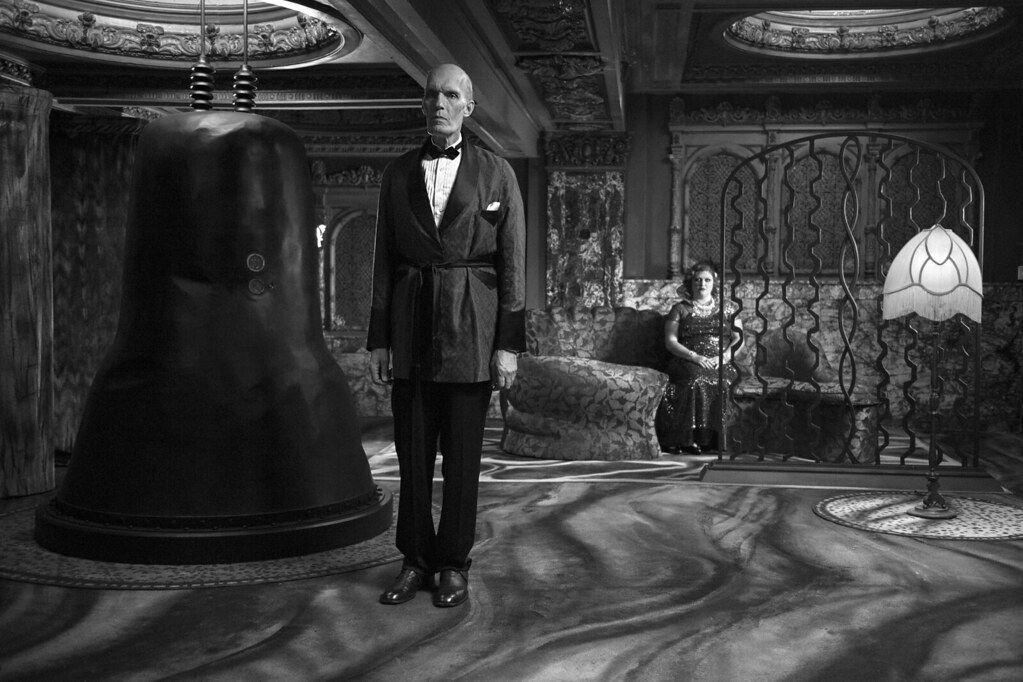 More detail emerges on ????????'s environment especially in The Return: Part 8 (episode 8). It is a fascinating place, more on this space later.

"Richard" is Richard Horne? the sadistic trash offspring of Audrey Horne and Bad Cooper? Linda? Linda remains unclear.
Posted by the art of memory at 6:43 PM No comments: 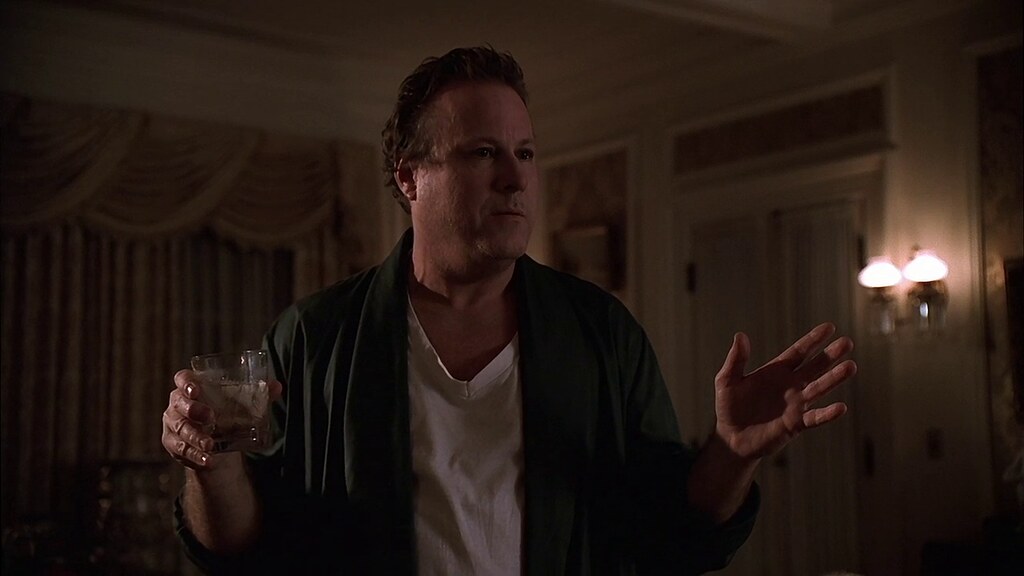 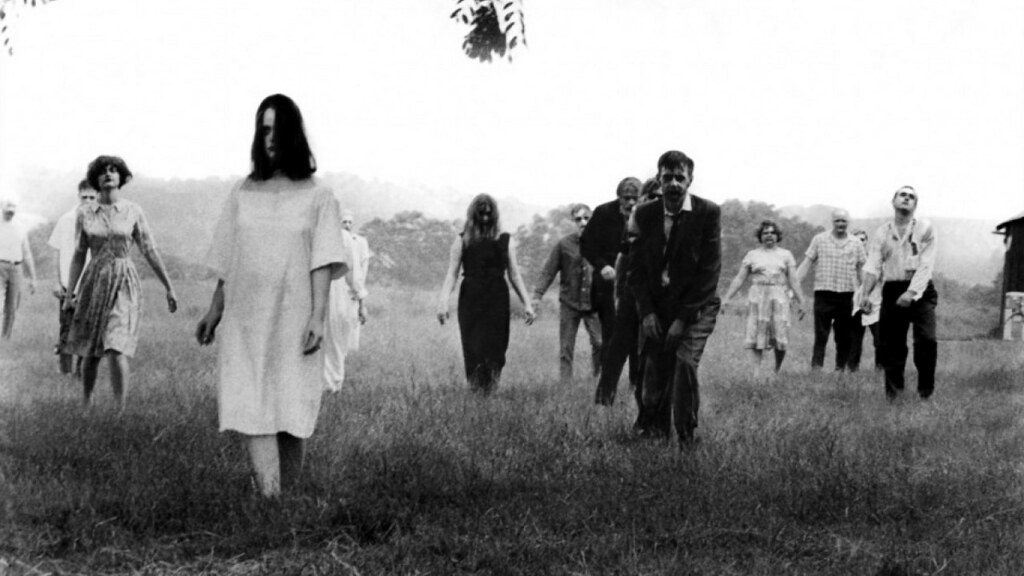 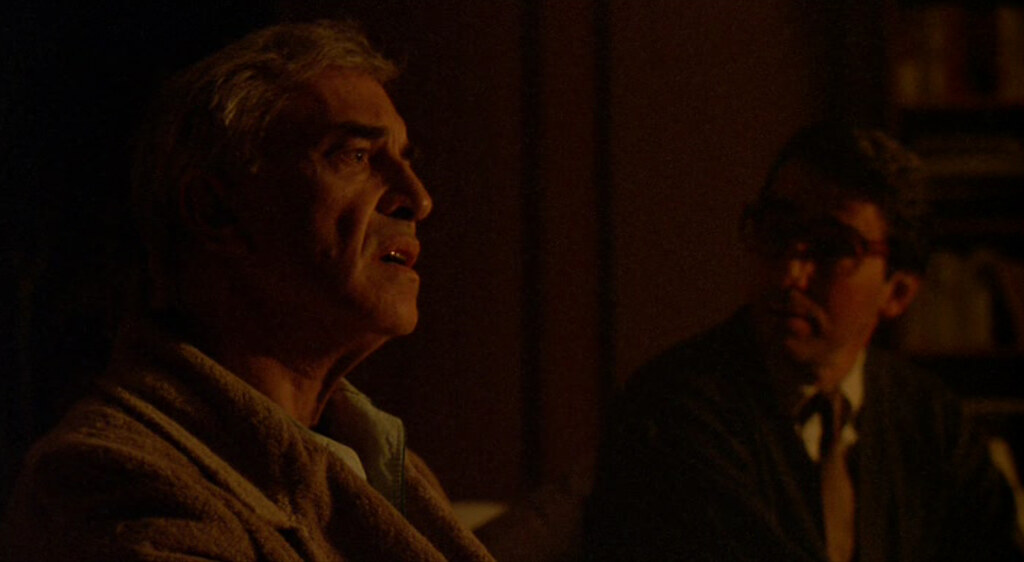 Posted by the art of memory at 6:40 PM No comments:

the drawings of emily nelligan 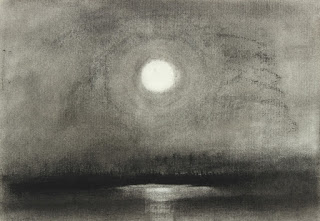 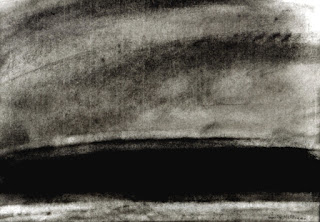 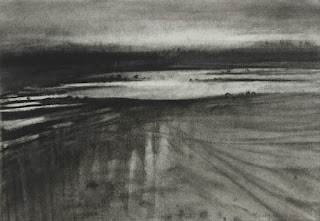 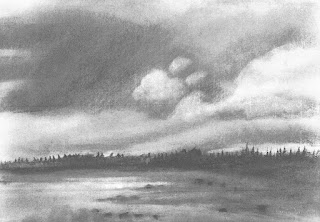 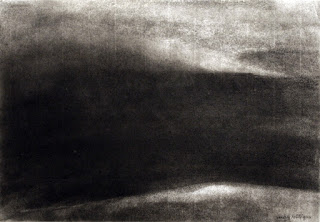 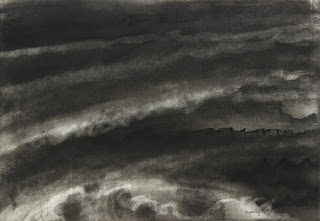 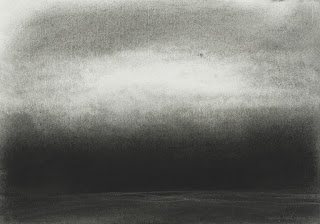 the work of emily nelligan

Posted by the art of memory at 2:36 PM No comments: 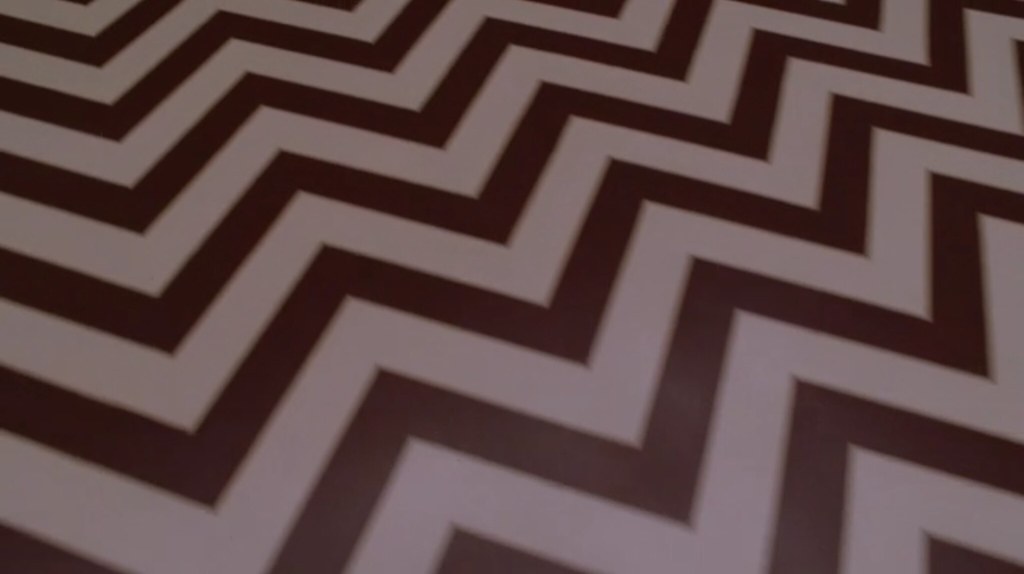 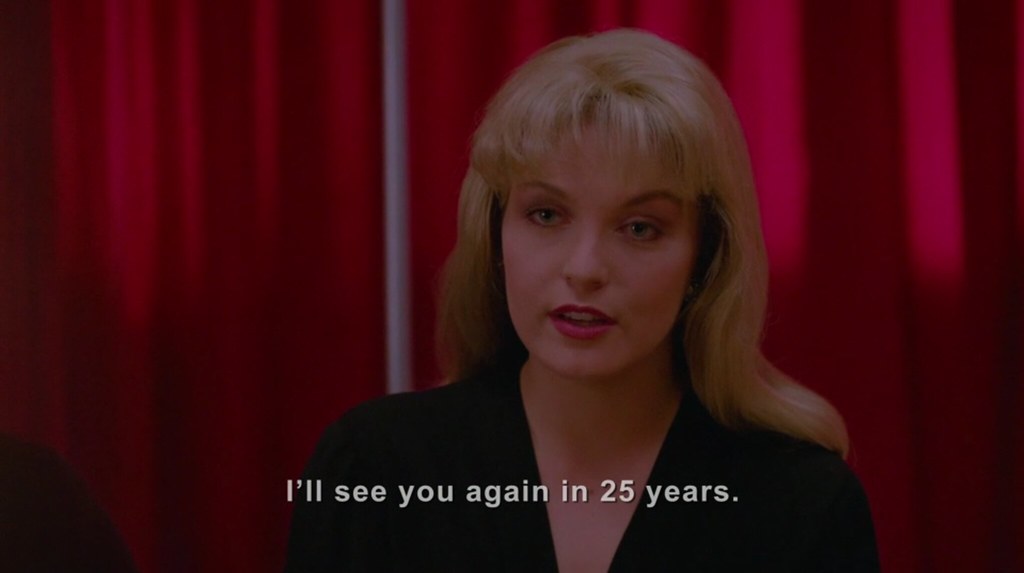 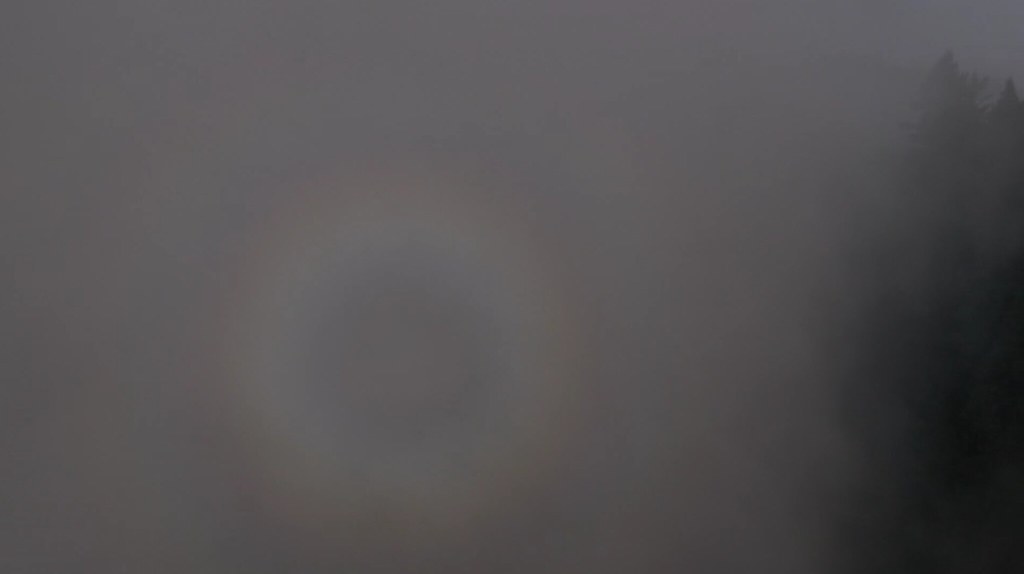 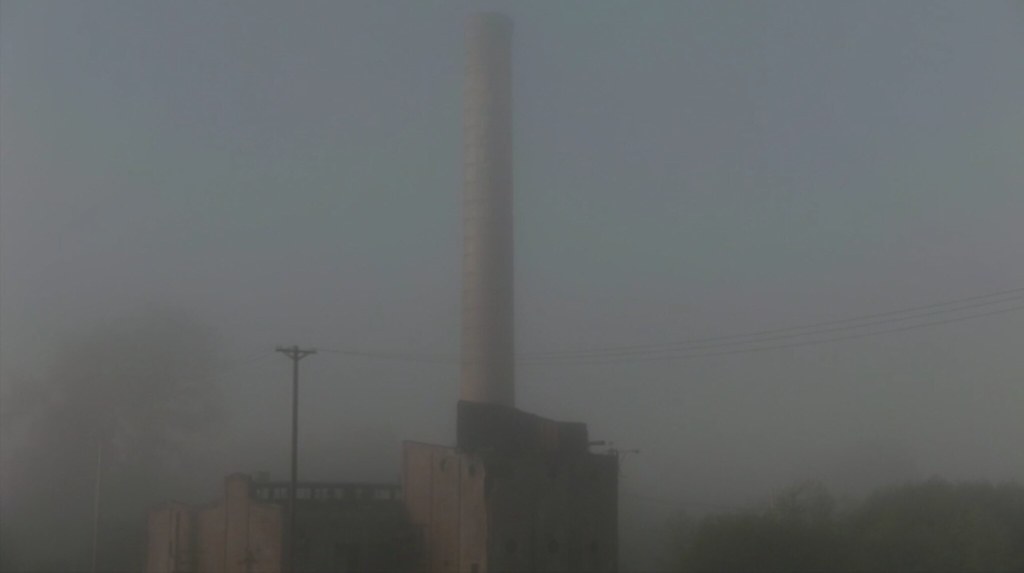 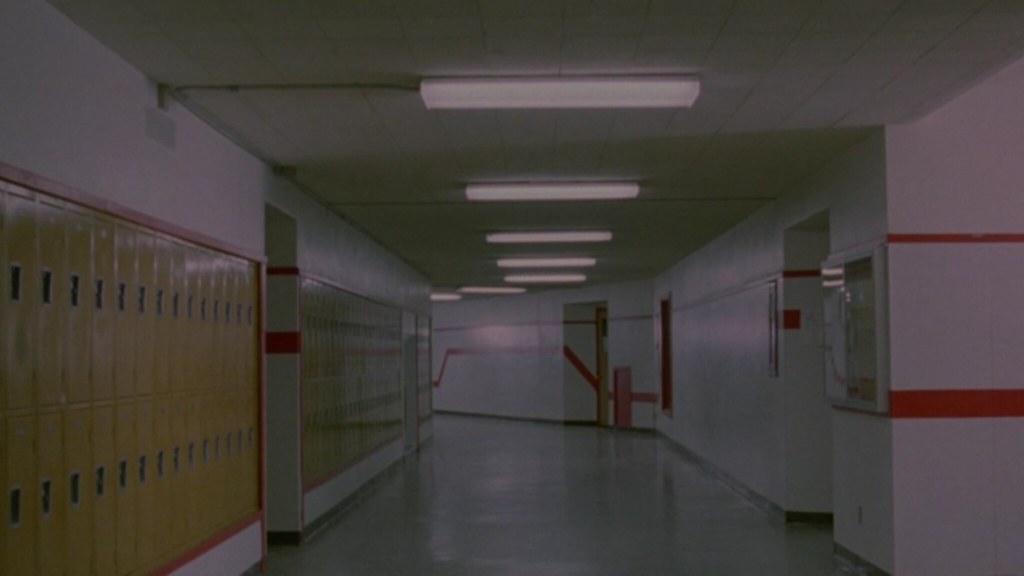 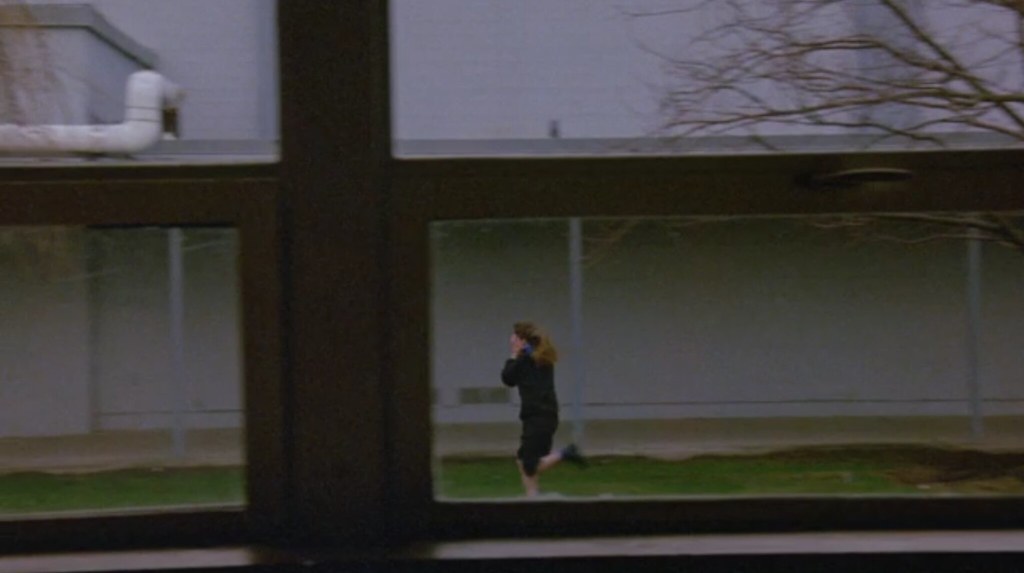 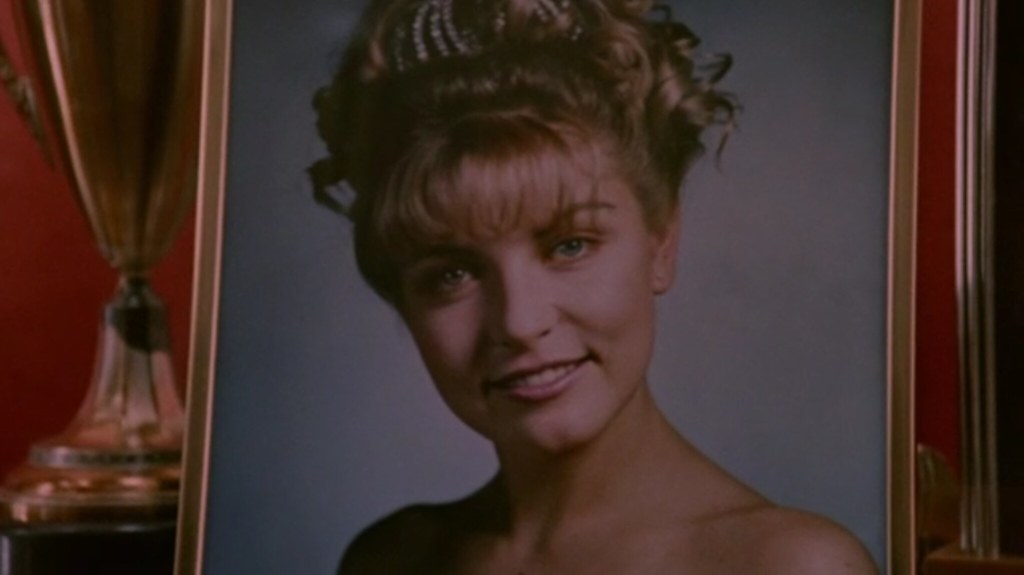 the opening credit sequence for part one** varies slightly from later parts as it has the i'll see you again in 25 years intro (see images one through seven) which is accompanied by a drone undercurrent. the intro begins in the black lodge with a rather psychedelic filming of the floor's "chevron pattern" and the red velvet curtains. it then shows agent cooper and laura palmer with her message of i'll see you again in 25 years, a backwards finger snap, and the meanwhile hand gesture. there is some conjecture on the meaning of the meanwhile hand gesture. the intro then shows a montage of the saw mill, the twin peaks school, and a young female student running and crying in slow motion seen through school windows. there are some subtle yet hair-raising orchestral flair ups in the soundtrack during the running, not unlike something you would hear in the shining, then back to laura palmer's picture prominently featured in the school's trophies display window.

in addition, the opening credit sequence for the first part (or episode) does not have laura palmer's face multi-exposed over the waterfall as it does in later parts, as it would have been redundant to her face seen at the end of the intro. 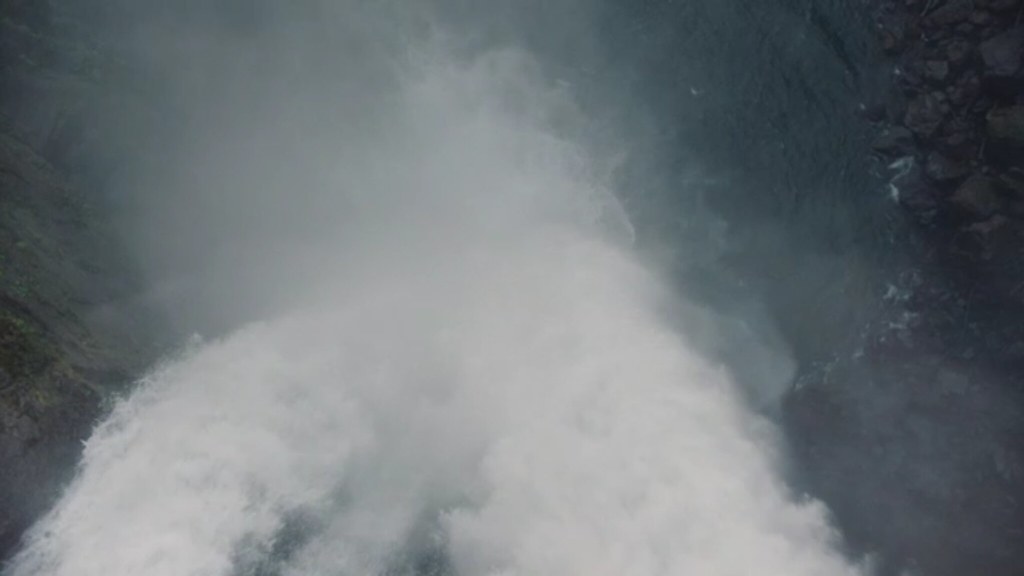 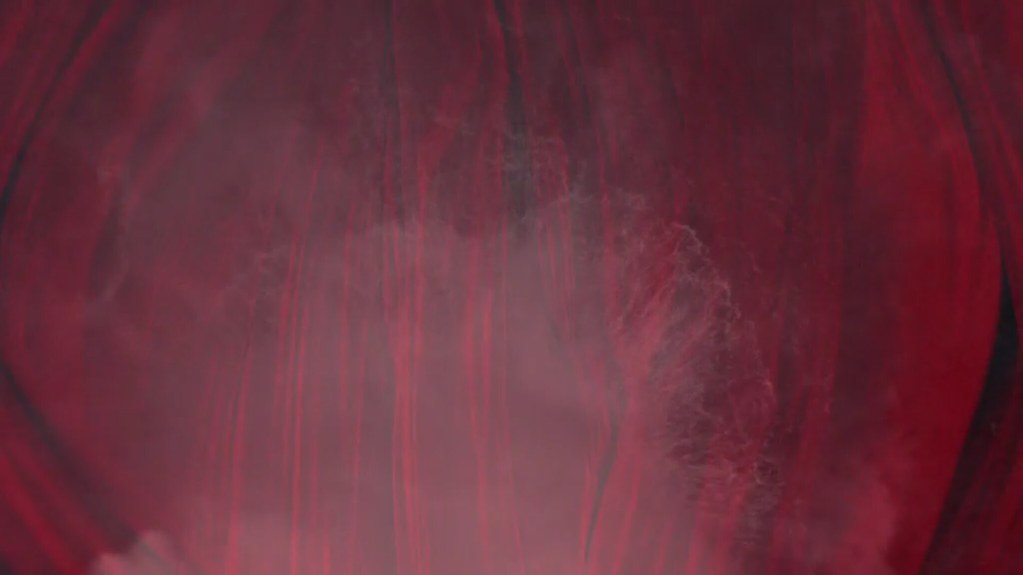 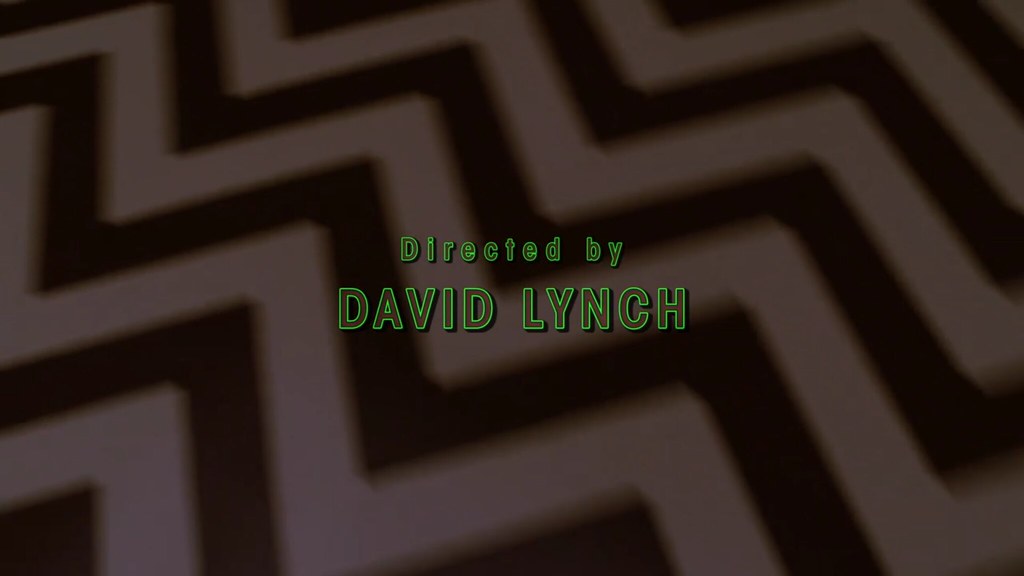 to my ear****, the badalementi track twin peaks theme is a shortened version from the first and second season (and the ost) of twin peaks. it sounds to me to be a new recording which is very close to the original, but it might just be a goosed up version of the original.

variations from the original are the beautiful drone introduction,  reverberant cymbals which begin around the time the camera starts tracking the falls, distant water sounds which are heard as the falls descend, and lastly a doom-laden drone that fades up around the time the chevron pattern appears.

all these variations from the original have something of a dramatic effect on the viewer, and warn of what is to come in the next 18 hours.... less soap opera business that dominated much of the first two seasons (especially the second), and more abstractions and mysteries that will dominate this season.

the beauty that is this title sequence has much to do with, i assume, the editing brilliance of duwayne dunham. the slow dissolves are so unlike much of what one sees in narrative film or television, and are more commonplace in avant-garde and european film. dunham also edited blue velvet, wild at heart, and parts of season one and two of twin peaks. his work throughout this 18 hour work is groundbreaking and has much to do with the effect this work has.

*this series on twin peaks aims to mainly look at visual and sonic mysteries happening in the series.

**in an interview with dean hurley, music supervisor for lynch, he stated lynch saw the new twin peaks as a single movie with sections or "parts", rather than episodes: "the whole thing - remember - was one giant script shot as one long movie. that’s why he is calling these “parts” and not “episodes” - because they weren’t designed to have arcs between each bit like a normal television show. he (lynch) was interested in the giant story and slicing the pie up."

***up to part nine when i did this post

***if anyone has more information, or hears it differently, i would be interested in more info.
Posted by the art of memory at 3:13 PM No comments:

plato's cave thirty (being a film journal) it is happening again, preliminary words on television 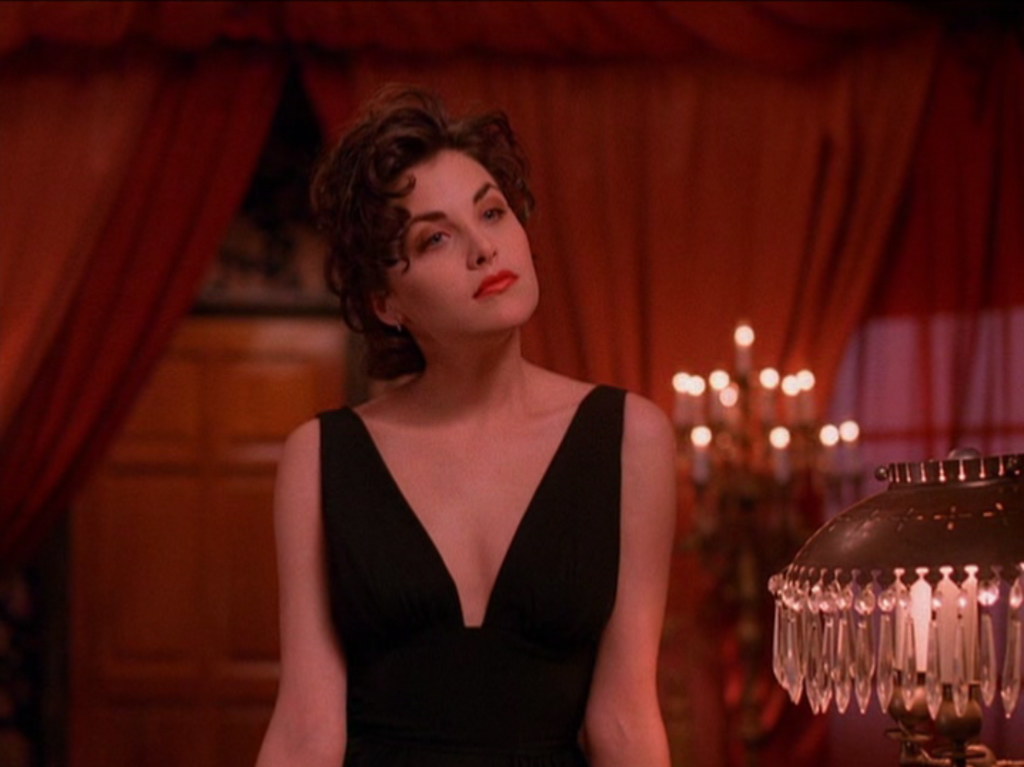 before devoting the art of memory for an indeterminate amount of time to twin peaks, here are some preliminary words on where the author stands in relation to telvision.

i watched twin peaks season 1&2 as it aired on television when i was in high school (1990-1991). i remember watching with my father, who was the first person to get me really excited about film (when i was around 10 we watched the exorcist together and my life was changed forever). viewing twin peaks had an extreme impact on me. the years after, i rented the vhs tapes and purchased the dvds and rewatched numerous numerous times. i had the laserdisc of the film and watched it many times and loved it (still do). of course the majority of season 2 is quite meaningless, the ones directed by lynch are worth watching more than once, and the last one is a masterpiece.

in college and for many more years, i was only interested in the movies, and with the exception of lars von trier's the kingdom from 1994 (which i saw projected at the castro theatre in about 1997 in sf), i didn't watch any television with the exception of rewatching twin peaks which was always my favourite lynch work.

sometime around 2002-2004 i started watching david chase's the sopranos (1999-2007) and david simon's the wire (2002-2008). both shows had a huge impact on me and renewed my interest in television. over the years i have rewatched these two shows 3-4 times. the sopranos came about because goodfellas was a film i watched over and over and this somehow seemed to be a truly original extension of it. also i was bored in a way with film, couldn't related to what was happening at that moment, like wes anderson.

around the time of season 2 of vince gilligan's breaking bad (2008-2013) my good friend recommended i give it a go as it was beyond words and as good as the two previously mentioned, in his estimation. the program knocked my socks off (and still does). the four shows together remain a standard for the potential of tv (twin peaks, the sopranos, the wire, and breaking bad).

in addition to these fine programs, i have enjoyed the following shows or mini series over the years :


these shows i feel ambivalent about or downright don't like. listed here to gives some clues of the viewer's taste and preferences :

gearing up for many in depth entries on david lynch and mark frost's twin peaks. i present forthwith number one with a selection from lewis and clark's journals and an owl-image. in preparation; reading mark frost's wonderful book the secret history of twin peaks: a novel (image above) and i listened to the informative jeff jensen and darren franich's a twin peaks podcast: a podcast about twin peaks, and watching each episode numerous times. plan on concentrating on music, cinematography, mystery, subtleties, sound design, story, actors & characters, and whatever else strikes me.

lost in the beauty and mystery of the show, frames still reverberating through my brains as i walk and as i sleep.

on a side note, i received an annoyingly negative comment on a previous post. i don't often get comments so it is nice to get one but please leave the negative nonsense to yourself as it is not helpful and makes me want to quit this business. to quote the lord of the rings "be silent! keep your forked tongue behind you teeth. i have not passed through fire and death to bandy crooked words with a witless worm!"
Posted by the art of memory at 10:02 AM No comments: