plato's cave forty one (being a film journal)


The first documentary this film enthusiast viddied. Probably around 1988 or 1989, my last year of middle school/first year of high school. Helped me to truly comprehend the state of the world at the time, with Reaganomics, yuppieism and such is life. In addition, Alex Cox's Repo Man from 1984 was very enlightening. These days with Trump, neo-nazis, know-it-all Millennials, trigger happy lowlifes and "if you were dying in the mud I would do nothing but loose some spittle on you" contemporary Americans, has this film almost become a reality? Working now on the Upper East Side, this film has further meaning for me (grocery store scene: "I've got one that can see...". I recently listened to Marc Maron's interview with Mr. Carpenter and found his view of the world to be very inspiring. He is a truly great artist with an impressive body of work, which is pretty consistent (something rare). Rather than dwell on the negativity of the world though I would rather embrace this truly beautiful film. Here are some simple observations on this great work, from someone that has watched it over and over through the years.

Entering Los Angeles, the city of angels, via trains in cinema

Awkward arrangement of spectators in this space,
as one feels like an outsider questioning the man

Our hero passes the time by watching an old timer's tv program.
Carpenter is one of the few that can criticize pop culture and
still make something beautiful and mysterious

"What have you got in that pack? tools?"; actor Peter Jason

Our hero playing harmonica on a lovely Los Angeles night

"I believe in America, I follow the rules….."
(similar to Bonasera’s words in The Godfather)

Direct response to Reagan and yuppies :

"Our impulses are being redirected,
We are living in an artificially-induced state of consciousness, that resembles sleep
The movement was began eight months ago by a small group of scientists,
Who discovered quite by accident these signals being sent, through….
The poor and the under-class are growing,
Racial justice and human rights are non-existent,
They have created a repressive society, we are their unwitting accomplices,
Their intention to rule rests with the annihilation of consciousness.
We have been lulled into a trance,
They have made us indifferent, to ourselves, to others….
We are focused only on our own gain,
Please, understand, They are safe as long as they are not discovered,
That is their primary method of survival,
Keep us asleep, Keep us selfish, keep us sidated
They are dismantling the sleeping middle-class
more and more people are becoming poor,
We are their cattle, We are being bred for slavery,
The signal must be shut off at the source."

Lovely green church glass with red and black coming through, (day and night)

Police invading transient camp/church.
Photography with lens refractions, flares, soft focus and the like.
Scene reminds one of The Terminator.
Cinematography by Gary B. Kibbe

Beautiful shot with our hero buggering off with goggles,
pigeons heard in background

Some lovely and intriguing sentiments

Our first alien-yuppie - “what’s your problem?”

Reaganisms and pre Bush nonsense (other films of note -
The Big Lebowski and Repo Man) “the feeling is definitely there,
it’s a new morning in America; fresh, vital. the old cynicism is gone,
we have faith in our leaders. we don’t need pessimism”.
The brand name of the tv is very nice; sleep 8 hours
maybe a Max Richter tv

“That’s like pouring perfume on a pig”.
Funny both women look the same with and sans goggles 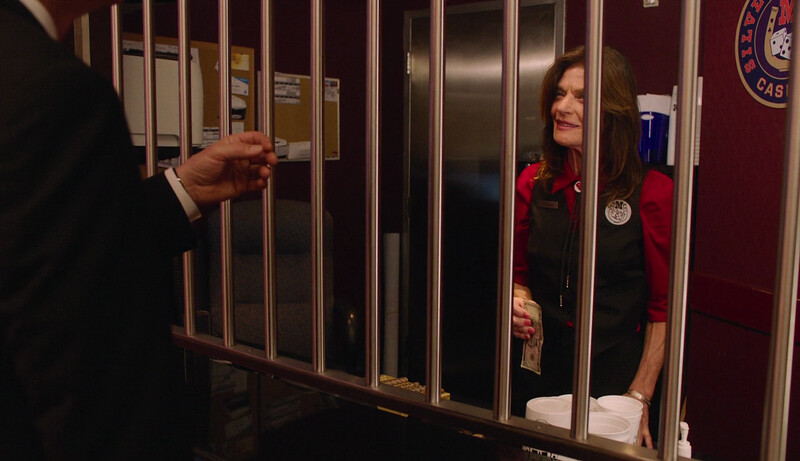 Los Angeles transient hotel. Of the many great LA films, this one stands out

Downtown living, post alien realization, conversation between Nada and Frank
“maybe they’ve always been with us, those things out there… maybe they love it,
seeing us hate each other, watching us kill each other off, feeding on our own
cold fucking hearts [beer opens]…. I got news for em, gonna be hell to pay”

“Watch out no-one follows you, the world needs a wake up call”