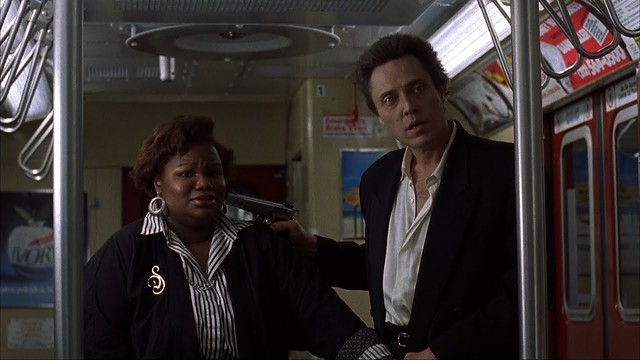 Really one hell of a film, Ferrara has a great sense of visual rhythm and color. Some explosive bits of violence not unlike Michael Mann climaxes, shot beautifully and constructed like a French poem. Ferrara's other films Bad Lieutenant, and The Funeral are masterpieces, Fear City pretty damn good (see below). Great film.

3.12.2019
Robert Benton - Still of the Night - 1982
(rewatch)
Interesting how memory works. I thought this film seemed strangely familiar but not until the end I realized I had seen it. Had some good moments, Roy Scheider always a pleasure. 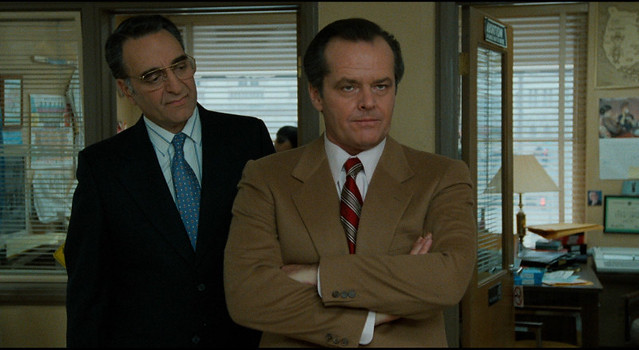 The beginning and end of this film on a rewatch are completely without interest, and some dated business that doesn't sit well, but a film worth a watch if you are a William Hurt fan. Hard not to be critical of films from this time period but overall this is a good film.

Another William Hurt drama. Quite a unique and underrated actor, no one really like him that I can think of, his way of speaking, mannerisms, and intellect. Smoke, Altered States and Body Heat are his best I believe. Always a pleasure to see Piper Laurie. 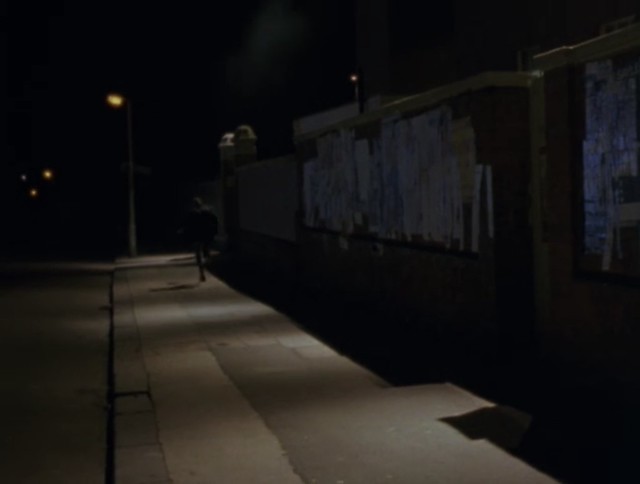 Besides being one of the best British films (in my opinion), there is much humor found in Made in Britain. Tim Roth's deliverings of "wanker" this and "bullocks" are raw and quite uncomfortably beautiful. Such a perfect film. Alan Clarke is the most underrated British director, I assume because he mostly worked for television? I first saw them on film in a movie theater, so have always thought of them as "cinema".

One of the few good biopics on an artist. A few others that come to mind are Peter Watkin's Edvard Munch, Martin Provost's Séraphine and Maurice Pialat's Van Gogh. Ethan Hawke is on a roll.

Watched this with my father in his new place and really enjoyed his commentary. He wasn't crazy about the film but enjoyed watching it. 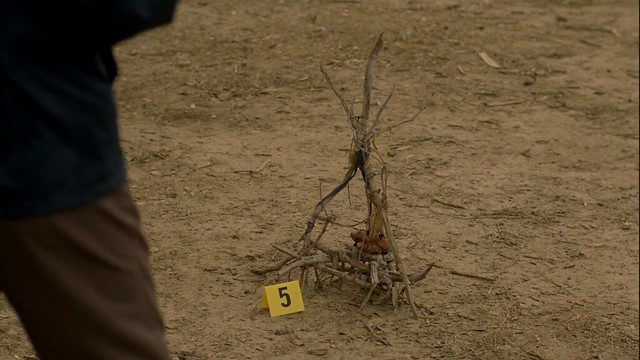 I believe my fourth time watching this, still quite a complex story after so many viewings. Currently reading The King in Yellow perhaps prompting a fifth viewing. I found this article to be enlightening regarding many levels of meaning in the show, some of which I had figured out but mostly not. Had not thought about Martin Hart's children being victims of the diabolical child murder collective, that particular aspect of the show is just hard to deal with. 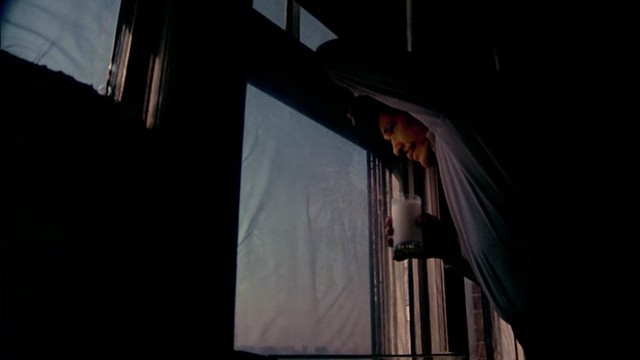 A film which I saw as a kid but could not remember, but (perhaps because it came out the year I was born) I enjoyed the hell out of it. Nothing like watching a western take place in the grimy streets of New York in the 1970s. After a recent viewing of Once Upon a Time in the West, I realized how much I liked Charles Bronson. Thought of Travis Bickle mentioning cleaning the streets a couple of times : "Someday a real rain will come and wash all this scum off the streets". 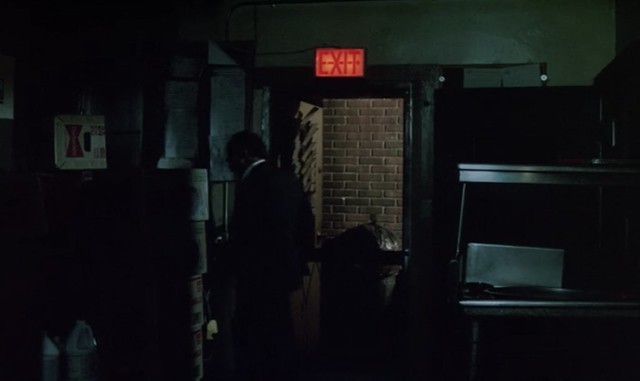 An enjoyable low-key Abel Ferrara film, pretty raw with a good cast. Hard to find an early Melanie Griffith where she doesn't disrobe, I find the "acting" sections of the film bring it down but the rest is pretty heavy, women walking in streets or missing trains, strippers, sleeze bags in clubs. 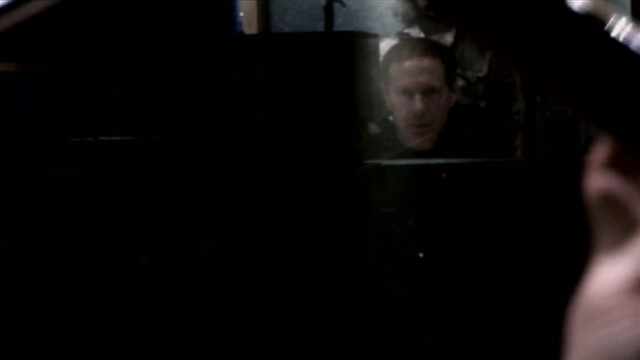 Watched this after a day of listening to Scott Walker, hearing about his death in the morning. Incredibly sad news. The footage of him making The Drift here is brilliant, he interviews very well also. Pictured above Mr. Walker is conversing with Alasdair Malloy on how to play the slab of pig, he discusses working with Mr. Walker here. 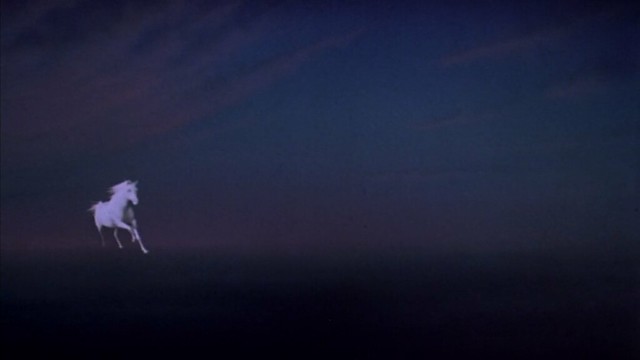 Had forgotten that Tom Waits was in this. Very good film. I really like the feel of it with a dark dirty palette (shot by Lauro Escorel) and downbeat drone oriented music appearing and disappearing here and there, composed by John Morris. Some strange nightmare moments Jack Nicholson has of people he has killed or have died, they are truly frightening. The TriStar Pictures horse use to really hit me heavy as a teenager and pre-teen.

Another in the series of I hate sports but enjoy sports films. Very over the top and corny but an enjoyable film.

Rest in peace Agnès Varda. I have only seen a handful of films by her so will watch more the next few weeks. This and Vagabond had been my favorites. Sort of in the Mekas territory here, with her playful use of the camera.
Posted by the art of memory at 5:26 PM No comments:

Very nice film by Mr. Lee of which I really enjoyed. Intense with great notes on the state of our country. The scene pictured above had some nice subtle camera work. Aways a pleasure to see Mr. Driver on the big screen. 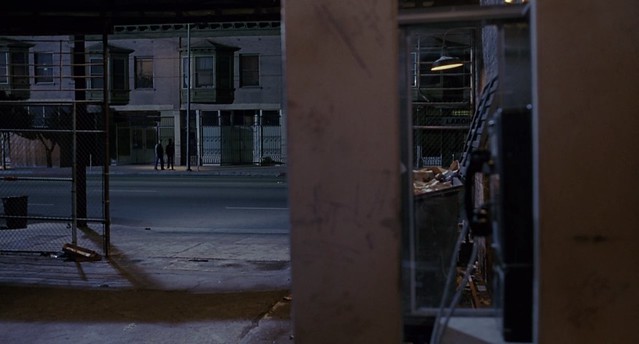 Another Jean-Claude Van Damme action film taking place in New York and Los Angeles. Some unrefined fight scenes. I always find myself in love with raw urban photography especially in films from the 70s-90s. Lionheart and Do the Right Thing (below) really get into that world heavy. Wim Wender's Wings of Desire and The American Friend have very similar ambiance. So do these films * ** 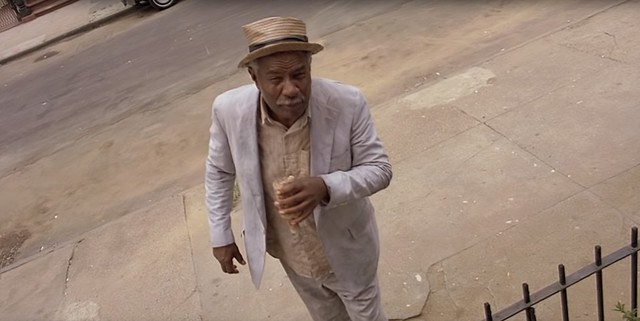 First year of film school I would watch this over and over along with Goodfellas, Mouchette, Jeanne Dielman, Andre Rublev and a few others. Strange that I would end up living a few blocks away from this location in Bed-Stuy. Relating to the film Ida in the previous post, there was a complaint I lodged on Pawlikowski's potentially shallow camera work and editing. In Do the Right Thing we see some similar photography and editing but to my mind not only more subtle, but with a degree of sincerity and gravity missing from Ida. In an exchange between Da Mayor and Mother Sister, we find two shots, one of each character, with non traditional camera setups (perhaps inspired by Da Major's alcohol consumption). The camera angles hover between jarring and sensual. Mr. Lee in a simple scene delivers a radical moment that is in some ways connected to King Victor's Street Scene, but also with Eisenstein or Vertov's avant-garde films.

I would watch an 8 hour film of Denzel Washington putting together Ikea furniture, or reading from a phone book, or eating broccoli. He is one of those great actor, always enjoy seeing him do his work. I have never completely enjoyed a Fuqua film, his most famous Training Day goes from being a solid heavy dark film to being in the Fight Club or Matrix territory. Maybe that is not accurate, I tune out in the film about a third of the way through when it starts throwing in surprises. I am probably alone in this opinion though. The Equalizer had some nice energetic (and quiet) scenes with Denzel Washington but overall it just had too much fat on it, like a steak you have to cut all the grizzle away to get at the meat. 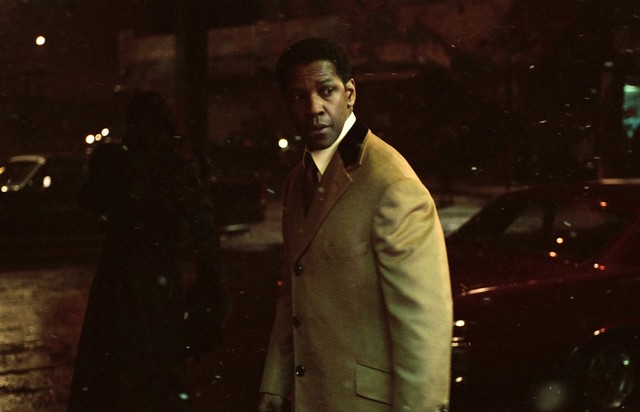 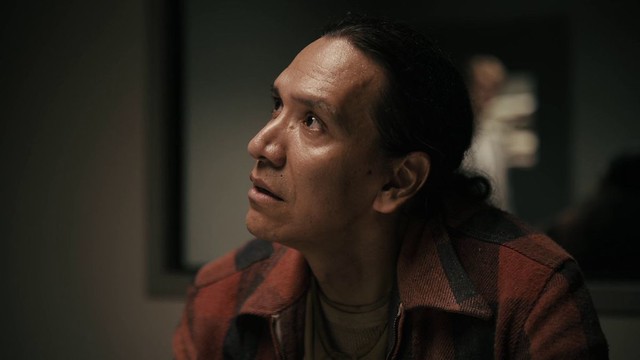 The first season of True Detective is one of the few television programs I thoroughly enjoy (except for the offensive sex scene that plays out over the Vashti Bunyan's Train Song). I have watched it about 4 times now and ready for another, it just has a fantastic ambience and is put together so well. The second season is not unlike The Godfather Part 3. This new season on a single viewing seems to be about at the same level as the first season, but more subtle so perhaps it comes off less virtuosic. Stephen Dorff and Mahershala Ali are really pulling some heavy moves. I know I have seen quite a few Dorff films but he never really made an impression, but his performance here is like a bat out of hell, low key mixed with fire. There seems to be a lot of undercurrent in his performance, like potentially being in the closet but coming off a mix of alpha man and isolating extroverted depressive. Hoping to watch a second time in the next couple of weeks to figure out some of the riddles.

Michael Winterbottom - The Trip to Spain - 2017
Sequel to The Trip to Italy and The Trip with Steve Coogan and Rob Brydon. 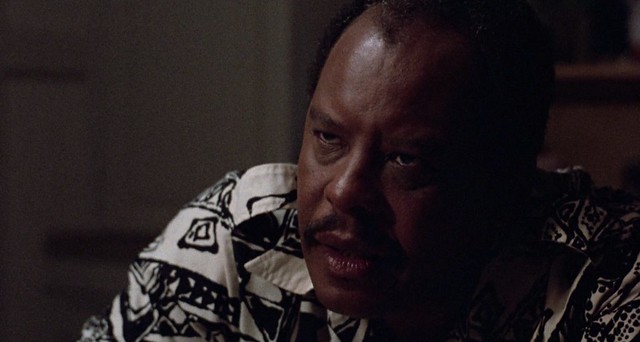 3.5.2019
Charles Burnett - To Sleep with Anger - 1990
I really love Burnett's Killer of Sheep. First time seeing this one. Pictured above is Sy Richardson who makes a pretty strong impression in Repo Man. 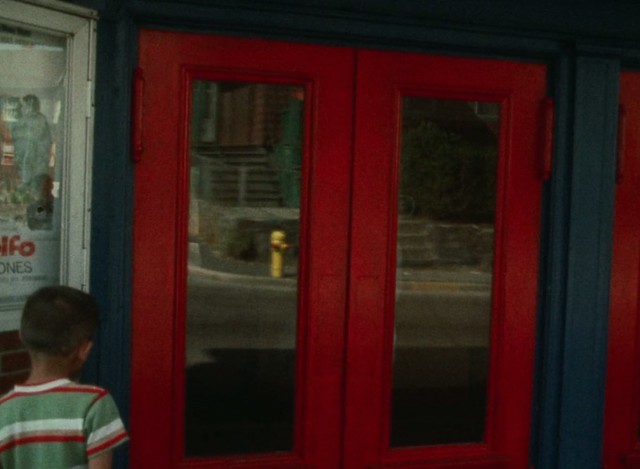 One hell of a film by Barbara Loden, shot on 16mm.  Her performance is unique beautiful, also Michael Higgins is one of the best character actors from the 70s, mostly I think of him as the odd looking guy from The Conversation. My partner in crime loves to quote Higgins in this film with his "no garbage" bit, on the hamburgers. 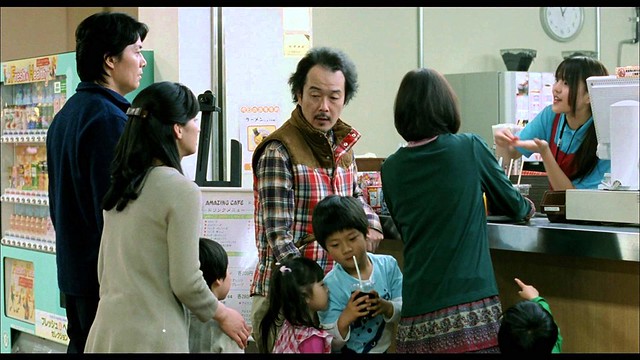 Hirokazu Kore-eda - Like Father, Like Son - 2013
Slowly going through this master's films. I love the actor Lily Franky seen above in center. 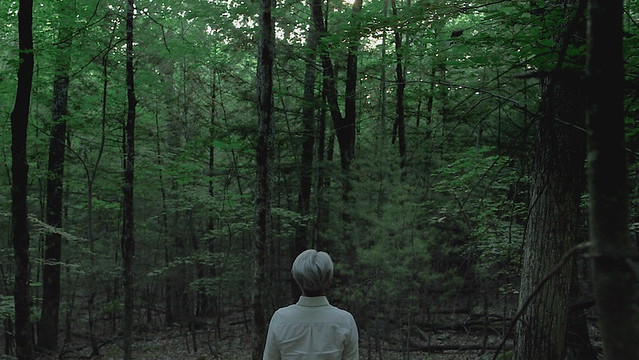 One of the best documentaries on a composer. Sakamoto's reactions to listening to his music, the joy and excitement, were just so beautiful to watch. A film I will watch over and over. A must see for any Tarkovsky fan as well. 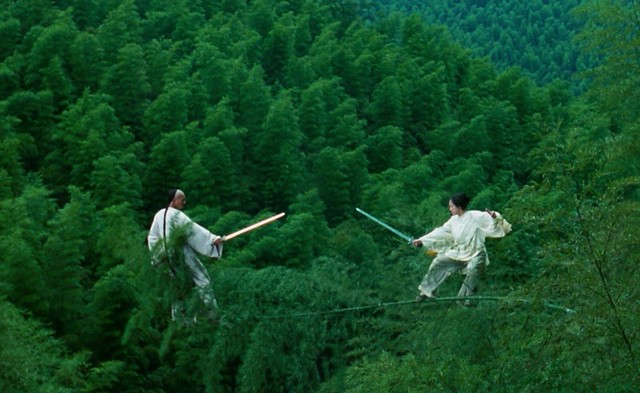 3.9.2019
Ang Lee - Crouching Tiger, Hidden Dragon - 2000
(rewatch)
Hard to not watch and try and figure out how the hell they did most of these shots/action sequences.
Posted by the art of memory at 11:20 AM No comments: