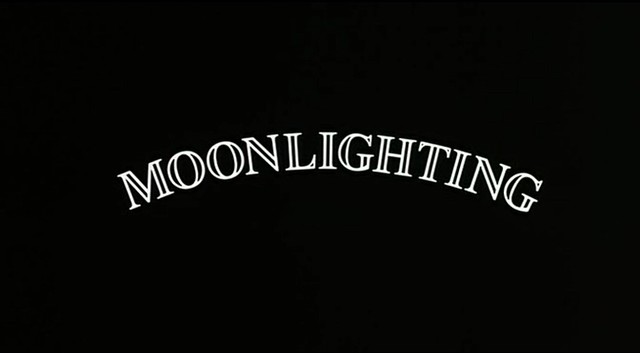 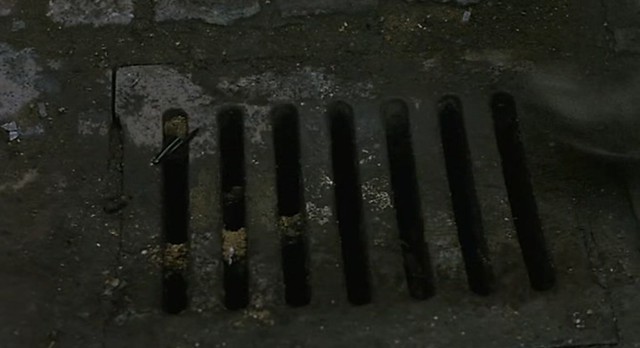 Recently posted some criticism of the currently popular trend of paying hommage and/or to pastiche 1980s films and aesthetics. Many positive comments were received from people who have similar feelings about this and I decided to finally start an analysis of a side chapter in film history that occurred in the early 1980s and came to an end after about four years with the introduction of works by John Hughes, the brat pack, and the like of right proper bastards. This dreadful business came in and pretty much destroyed an even trajectory of film history that really culminated in the 1970s and a few years into the 1980s.

Notes on a personal history with the cinema of the 1980s : This viewer was born in '74, and was a latchkey kid who had cable and later a VHS player. Starting in the late 70s, I started watching a ton of film, mostly on TV and often times at the theater with my mother.  My father would invite me to sit in on a lot of films he would get on VHS a little later on. I started with watching 70s films and inevitably moved into 80s films through my teens. By the time my late teens hit, a pretty strong dislike for the majority of 1980s cinema was in full swing, with the exception of works like They Live and Repo Man, which presented a clear criticism of the decade. Through my twenties, the 80s represented a decade in film to stay the hell away from and it was not until my thirties that I started to see hints of nihilism, darkness, dystopianism, and anti-romanticism in some slightly obscure works of the early 1980s. One of the first film that comes to mind is Jerzy Skolimowski's Moonlighting from 1982, and the first one that will be analyzed at a certain level. The question remains after years of watching these... what are the qualities that make these films so distinct? Why are these films so obscure now even with youngsters that live and breath the 80s (and now 90s) culture? These early 80s films actually seem more relevant to contemporary film and the world in general. The world of Hughes is like some kind of escape, why does a highly sophisticated culture of young people, in terms of political awareness, choose escapism in film? Now in my 40s, I can't completely deny the pull of the typical 80s film, I have rewatched many over the last few years, but in all honestly, the majority of them just leave me feeling nothing, whereas a film like Moonlighting is just so alive and relevant.

To give a little more context, some other classic films of interest in this early 80s would include Ivan Passer's Cutter's Way from 1981, Sidney J. Furie's The Entity from 1982, Ken Russell's Altered States from 1980, Andrzej Żuławski's Possession from 1981, Alan Clarke's Made in Britain from 1982, Barry Levinson's Diner from 1982, Carroll Ballard's Never Cry Wolf from 1983, Robert Bresson's L'Argent from 1983 (The fucking master!), James Cameron's The Terminator from 1984, John Carpenter's The Thing from 1982, and many more. 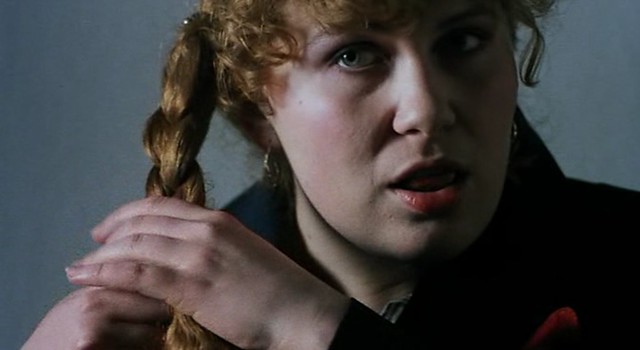 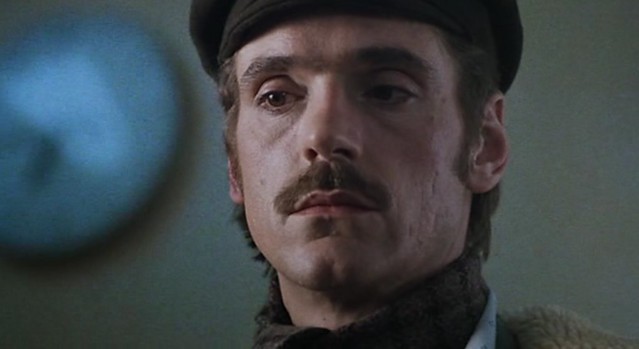 Some notes on style and structure in Moonlighting :

The film starts with unsettling electronic music by Hans Zimmer played over credits followed by some distorted speaking from a Polish airline announcer (pictured above). Immediately the viewer feels unbalanced. A slow audio dissolve follows to an electronic pulsing heard over a close up of Jeremy Irons (pulsing light out of focus in the distance, image above). All very strange with brilliant sound design, cinematography and editing. The story begins with Irons (Nowak) and his Walserian dialogue which becomes the dominant element in the film. His inner voice stumbles between mumbling, indistinct nonsense, worries and caper-like planning.  Nowak is our anti-hero, an outsider in the Colin Wilson sense. There are not too many films that can pull off 2 hours of picture and sound with a story that you can describe in less than 20 seconds and that really has almost nothing of interest to the quotidian viewer. Perhaps similar to the stories of Beckett... like Molloy and his sucking-stones, moving the stones from pocket to pocket.

The story in this film is so wonderfully absurd: Polish men under the leadership of Nowak, smuggle tools and money into London to work on a rich Pole's flat. They have a time line and budget, and have trouble meeting both. They run out of money and Nowak must resort to thieving, using some truly headscratching methods that are actually quite brilliant. Luck has much to do with his success.

The film was shot by Tony Pierce-Roberts, who photographed Tinker Tailor Soldier Spy (TV Mini-Series), A Room with a View, Howards End, and The Remains of the Day.

The sound design (by David Stephenson) is so lush in this film. One early scene when the Poles enter the dwelling begins with a doorbell ringing and slowly disintegrated to footsteps, distant drones and vague electronic sounds, followed by pigeon wings flapping with slight reverb.

Part of what makes these films so uniquely strange is that they have the rawness of 70s cinema, but through the magic of cinema (sound design, editing, cinematography) this rawness is brought to a surreal-like level. The more well-known films of the 80s seem to be a bastardization of this magic. Post Star Wars bullshit, films that push your buttons and make attempts to take away your ability to be an intelligent viewer, these facile experiences are what Duchamp called "retinal pleasure." Early 80s films have a hyper-realism related more to Kafka and Walser than the rotgut of typical 80s film.

Humor, absurdity and isolationism. The world seen through the eyes of the outsider.

Thanks to TW and TM for discussions on this early 80s strangeness. Any readers know of writings on this subject, I would be interested.
Posted by the art of memory at 8:35 AM