plato's cave sixty one (being a film journal) 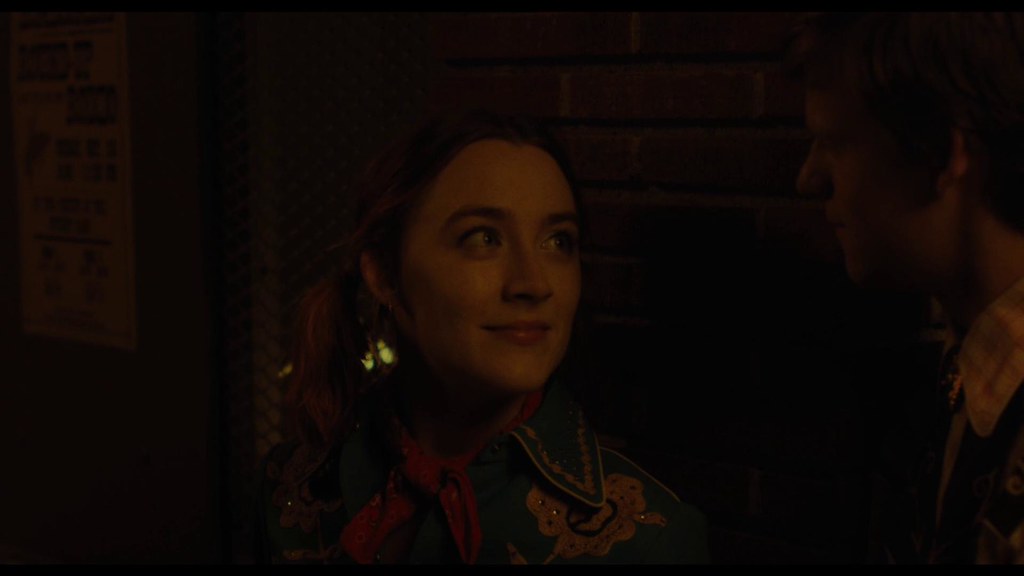 Started watching this last year and did the first season and a half or more, and quit. Trying a second time. I love Noir-infused Los Angeles and the dirt and grit and grime and who-gives-a-fuckery of modernist City of Angels, an endlessly mystifying city full of whores, whoremongers, and charmless nihilism. The show has some moments. Titus Welliver has some good moves. 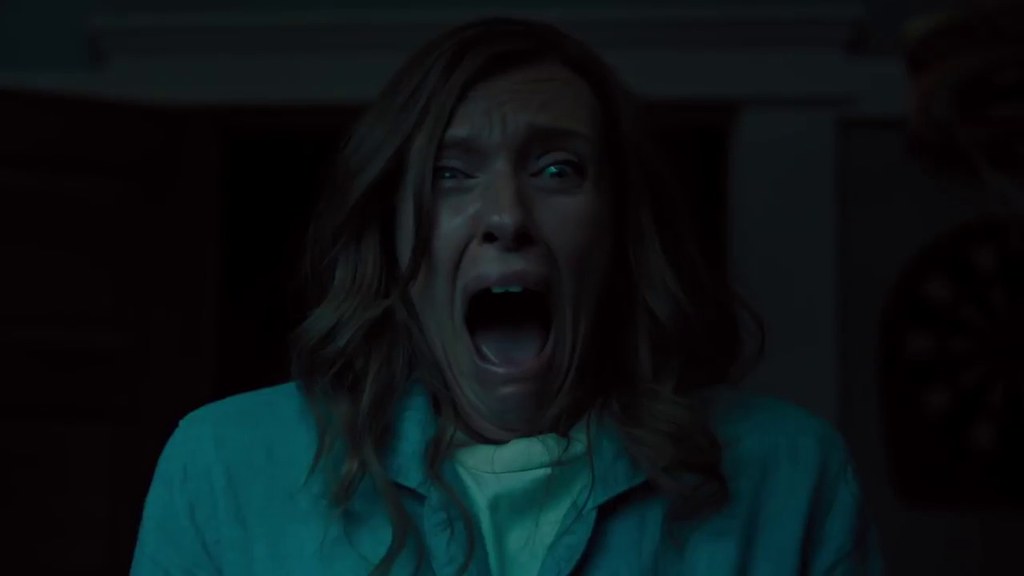 Frightening film.  Colin Stetson soundtrack really good, worked well throughout the film, subtle most of the times and intense here and there. Interesting editing and cinematography as well, Aster is obviously influenced by the masters and has learned from them. Some extremely liminal fright in this film which really gave it strength. The end of the film overly simplistic though.... 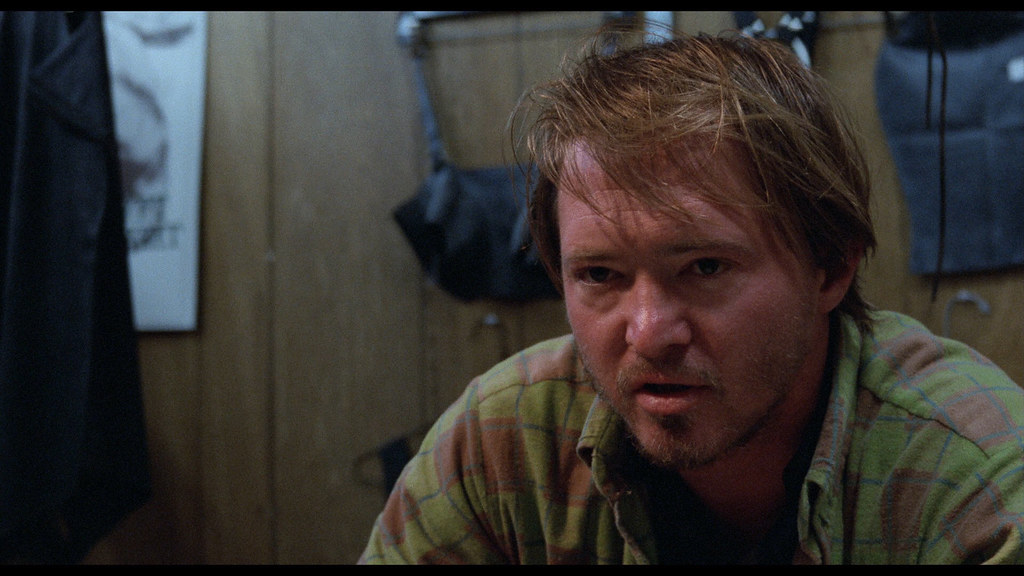 Endless hours spent watching this film.  Most classic of the classic 70s. The finale with slow to fast motion rage through fake walls after the Kramer-like Ratan is like a drug direct to the blood stream. Tracey Walter working a dirtbag bookstore/video store, what could be better?

Being an enthusiast of Mr. Schrader's films I have tried this film previously and not really enjoyed. Same this viewing.

6.23.2018
Fred M. Wilcox - Forbidden Planet - 1956
Ashamed that I had not seen this film. It is a good one, one can see where basic ideas in Alien came from. My friend Harvey said it was one of his fav films and that I should check it out, said it was a retelling of Shakespeare's The Tempest. Pretty sexy film too... some hot stuff in it. I grew up finding Mr. Leslie Nielsen's jokes quite funny, what a strange presence he has in this film, hugely comedic without really overtly displaying any comedy, just in his face it seems. 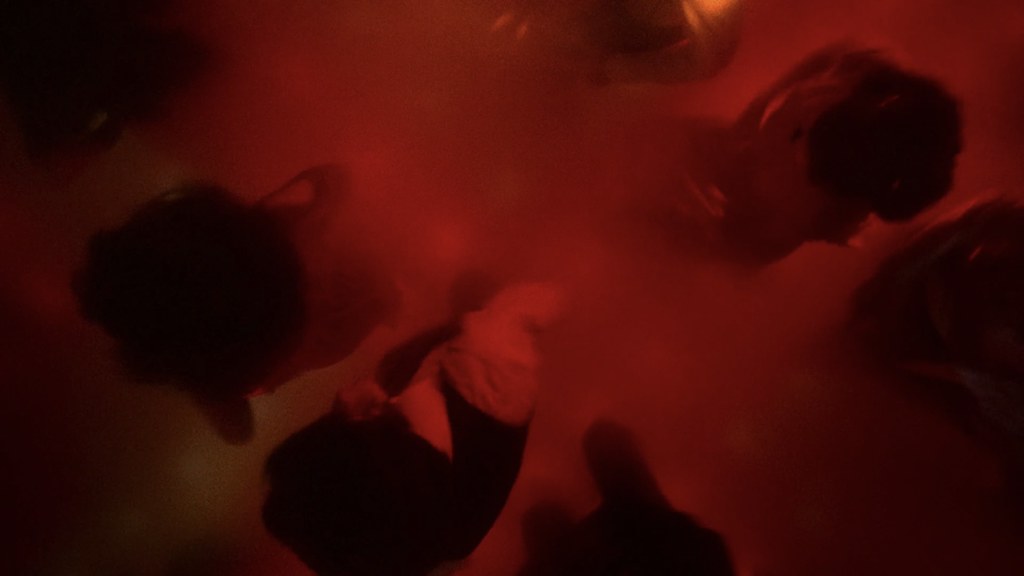 6.26.2018
John Badham - Saturday Night Fever - 1977
Use to watch often as a kid. Saw about 6 or so years ago and was pretty shocked how much sex was in it, and how serious the themes were. Such a great film, from the music to Travolta to the cinematography, etc. Serious film, worth many rewatches.

6.27.2018
Robert Mandel - School Ties - 1992
Second time seeing this film. I use to get it a little confused with Dead Poets Society (a film I really love), thinking that Matt Damon was in DPS. Took me watching DPS many times over the years to realize I had combined two films in my mind. School Ties is a good film, worth a rewatch here and there. 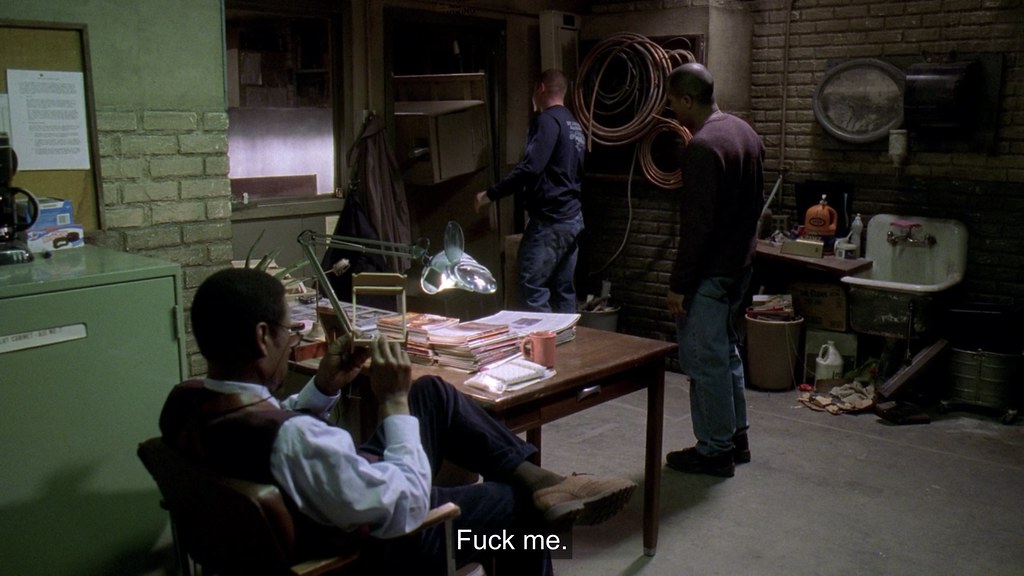 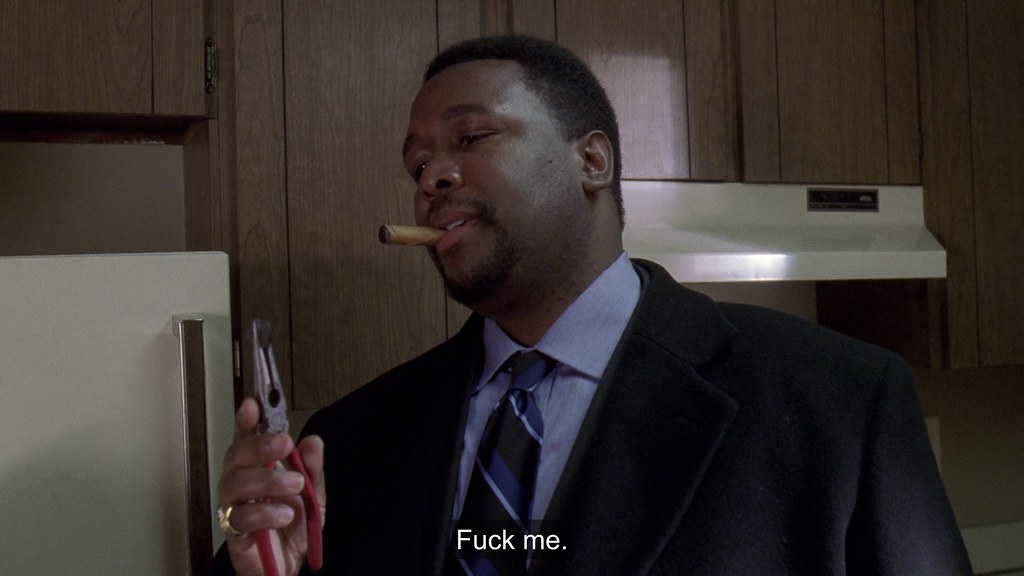 6.29.2018 - 7.3.2018
David Simon & Ed Burns - The Wire Season one episode One through Nine - 2002-2008
Fourth time seeing the first season. The Wire is endlessly rewarding, this viewer didn't start to understand the story until the third time, so this new viewing will yield good results. Someone who watches movies and television daily thinks of The Wire quite often as the actors show up in so much. From heavies like Idris Elba and Michael K. Williams to actors you see less often like Wendell Pierce. It is interesting that the second one of these actors enters the frame "The Wire" instantly enters the brain. Two classic moments from season one: 1. They attempt to move a desk from one office to another through a door opening without success, and finally realize both ends are pushing the desk. 2. Following the bullet trajectory in a case related to D'Angelo Barksdale, all dialogue consists of "fuck" and all its permutations. 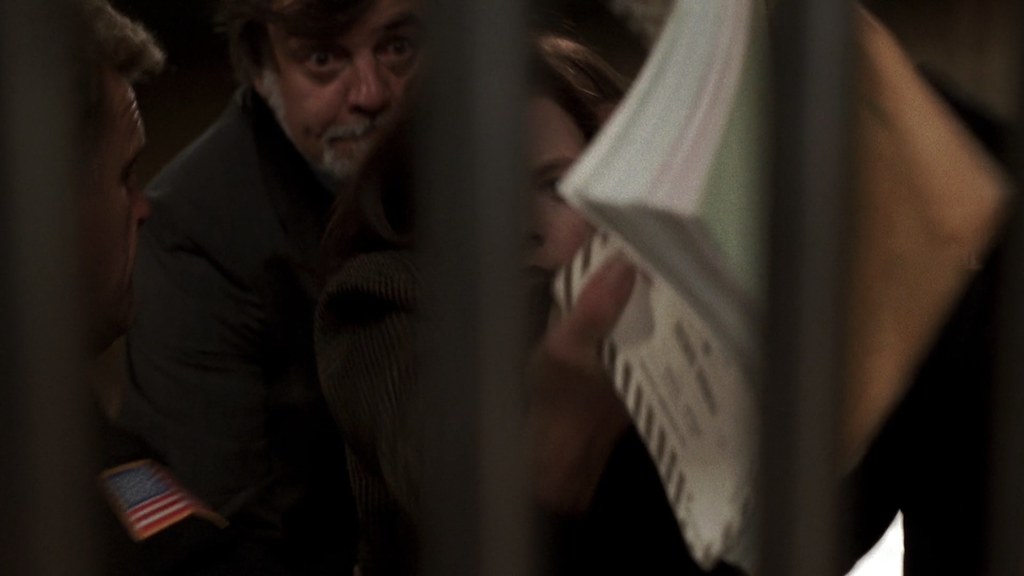 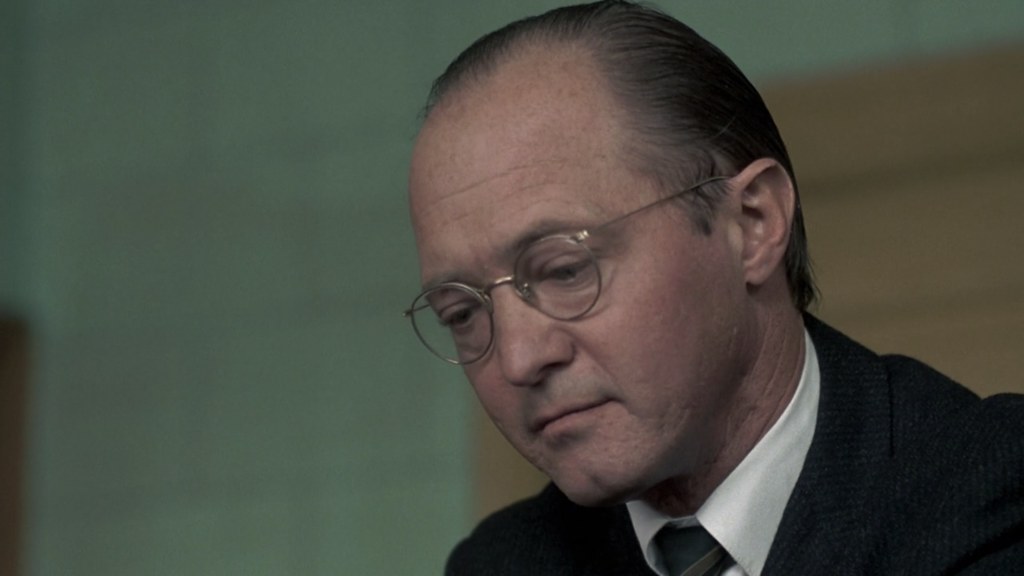 Purchased the Criterion bluray and watched for the 20th time or so. Love this film, I give it a 10/10 stars. Funny but I don't think I realized George Romero and Roger Corman were in it. Also I love Tracey Walter in this, the strange guy from Repo Man. The dp Tak Fujimoto also shot Badlands, Melvin and Howard (also Demme), Something Wild (also Demme), The Sixth Sense, The Replacements and many other well-known films. Never tire of it, looking forward to the commentary.

7.1.2018
Denis Villeneuve - Blade Runner 2049 - 2017
Second time seeing this film.  I have noticed much of the on line community and film podcasts pretty much destroying this film (as an example this disappointing podcast that lacks any sort of charisma or acumen) and honestly these responses are a bit mystifying.  It is certainly not the best film of 2017 but overall a very solid film with some truly stunning visuals, music, sound design, editing, alluring acting, and a story that is not exactly lackluster.  Is this a "having blinders on" gut response for people who fetishize the original? With the 1982 Blade Runner; it is a really damn good film but hard to say if it is worthy of this fetish (there are so many equally outstanding films that most people have never heard of like Charles Burnett's Killer of Sheep)? Villeneuve's Blade Runner relates to the original in many ways yet shouldn't it be given some room to breath on its own?

There appears to be this issue with many film viewers these days to pick a group of films and sort of construct a way of film viewing based around these works, and that all films must adhere to the ideas/style proposed within them. The result can be like putting blinders on before entering the theater or hitting the play button. This type of viewing damns the viewer to not actually see a film but only see it in relation to what they are comfortable with or in relation to others works. Maybe this is not a fair judgement and it is just a stinker of a film? But honestly my wife and I were ready to watch again right when it ended. Love the fucking dog in it too!

Also of note, this film features Wood Harris (Avon Barksdale) from The Wire, which I have been watching this last week. It would be interesting to just randomly start mentioning with each film the actors featured that existed in The Wire! 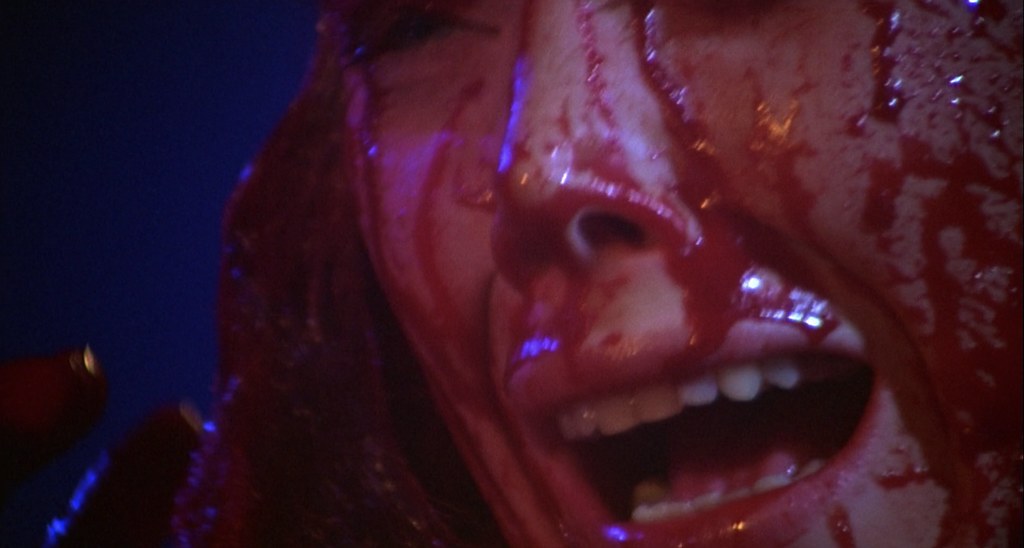 7.3.2018
Brian De Palma - Carrie - 1976
Many times seeing this film. A good way to pass the evening. "They're all going to laugh at you". I think De Palma's relationship to other films and film-makers (like Hitchcock) a bit strange.... not really hommages so much as a lack of creativity? The violin notes from Psycho used in this film really bring this question to mind. The film is strong enough, you can give him a pass but not sure about his other works. There are some pretty weak choices here in terms of music but it is a hell of a great film. Seeing two Travolta films this week was rewarding (Saturday Night Fever), quite an actor.

Catherine Hardwicke - Twilight - 2008
Watched this because I like Bob Pattinson and Kristen Stewart. They are both visually stunning with some strong actorshippe, the film is most of the time mediocre but has some moments. The baseball scene really ruined it for this viewer though.
Posted by the art of memory at 8:44 AM

I would imagine that you already know but Robby Muller passed away just recently.His style/technique was so unique and in my mind a lot of films that he shot would not have made it off the ground much less soared to the heights they did if not for his natural fluid approach to engaging the eye with the content.He really made the viewer feel present in the moment of each shot.I hope some theater will give a retrospect of his
work because he deserves it.