opus mors (the act of hearing with one’s own ears) 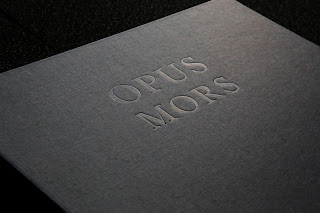 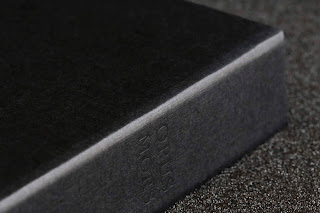 OPUS MORS by Jacob Kirkegaard caught my attention initially because of the relationship to Stan Brakhage's 1971 film The Act of Seeing with One's Own Eyes, a relationship I formed in my mind when I saw the postmortem concept of the work, but was later confirmed by Mr. Kirkegaard in a letter in terms of being an influence. It should be said that having followed Mr. Kirkegaard's work since his 2002 collaboration Soaked with Philip Jeck, everything by him warrants the utmost attention, especially if presented with such beyond lovely packaging, but the Brakhage relationship gave OPUS MORS a strong flash on my radar, and better than that initial interest, the release gave complete and utter satisfaction upon listening which is becoming more rare for this listener these days.

I first came across the Brakhage film my second year of film school, and my first exposure to his work. The influential filmmaker and teacher Saul Levine showing it warned of the content and perhaps this 19 year old kid was a bit nervous of a 32 minute film of cadavers being dissected? Yet not long after the film began a new way of seeing was initiated, and in a way a new method of interacting with not only art, but also with the world in a way that is not unlike the experiences of the great ascetics like St. Francis (this I should say is coming from a non-religious person). Looking back, part of the initial draw of Brakhage's film (one needs something initially to grab onto) was the deeply rich colors of Brakhage's photography, like a muted vividness with reds the like I had never seen (shown on a 16mm print).

Brakhage's work was initially also a bit tough for a youngster because of the lack of sound. The idea of watching film without sound was something that was "unheard" of for a neophyte like myself.  Today it is quite normal to see the opposite in the avant'garde film tradition in what could be described as music videos for sound artists where music is there to accompany pretty pictures or the pretty pictures are there to accompany pretty music. The rawness and almost asceticism of works like The Act of Seeing with One's Own Eyes is more of where this listener is coming from when engaging with a work like OPUS MORS. Through this exposure to asceticism, the viewer (with patience) finds themselves after a time (perhaps the unease and boredom needs a minute or two to dissipate) to be completely in a environment outside of their mind, full of lushness and perhaps slowly navigating toward a state of emptiness? Black walls lacking articulation slowly reveal complex details that are beautiful and in a way incomprehensible, not unlike Plato's Cave. And then as slowly as a subtle light reveals this magic, blackness beyond black again takes over one's vision and the memory of details reverberates through your consciousness. 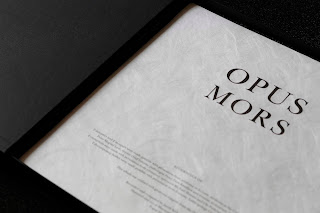 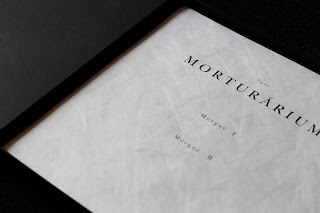 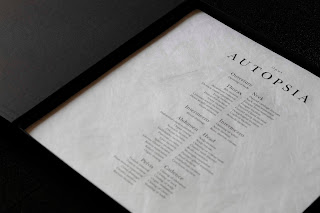 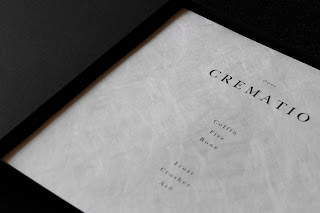 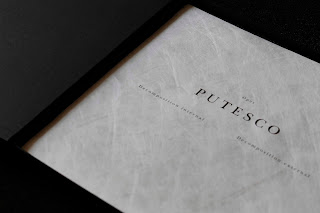 Jacob Kirkeegard's OPUS MORS is very much in tune with works, often long form, that hover someplace between deep asceticism and unknown pleasures. The second LP as an example is basically field-recordings of "a full autopsy starting with opening the corpse, following the removal and slicing and cutting open all the organs and brain, to finally returning all the organs, closing and washing the corpse". There is a concentration on this disc, in Kirkegaard's words, on the "timbre" of the body. Much like Brakhage's film, with only the ears here at work (instead of the eyes) we are slowly taken from a state that is potentially quite uncomfortable as a spectator, to a meditation-like place where the subtle tone-color projecting from the LP via the speakers has almost psychedelic like qualities, strangeness in a way that relates so strongly to first hearing kosmische music or the painted light of a Brakhage film. The acoustics of the autopsy room commingling with the acoustics of my spacious living room was magical and mysterious, having a conversation that is in a way quite over my head but nice to bear witness to. The sound of my dog chewing a bone as Kirkegaard concentrates his microphone on the cleaning of the body by the medical examiner/pathologist had a very nice Cagean quality, but also intriguing as my pup Leviathan generally is uncomfortable with music I listen to but here he found himself in total peace with the sounds emanating from the speakers.

One reason in often returning to a work of art over the years (repeat listens or viewings) is upon initial exposure, the structure of the work is somewhat unclear, but the importance of its meaning is felt at some unconscious level. Over the years of interacting with works that fit this description, one finds the initial mystery of the structure to be just as beautiful as the structure that emerges or sometimes does not emerge, not unlike multiple readings of a Raymond Chandler novel with a somewhat nonsensical plot line. OPUS MORS enters your perception with about as an intense of a drone LP (I played it very loud) as one can experience. Mr. Kirkegaard explains the beginnings as "two ambient recordings made inside two morgues listens within the slow and deep tones from the facilities that keep the corpses cold." This sounds like a description of a space listening to a space, or sound worlds within sound worlds within sound worlds, not unlike his 2006 recording 4 Rooms recorded in deserted rooms inside the 'Zone of Alienation' of Chernobyl. Honestly with the number of drone recordings one can listen to in 2019, it is hard to really find a recording that speaks so clearly. It is like the experience of someone hard of hearing suddenly being able to clearly hear details. LP 1 OPUS MORTURARIUM we get into this highly articulated world of droning sounds with in sounds within sounds within sounds, where sound that can almost be described as minimalistic mud, becomes like a bathing light that gives warmth to one's experience as a listener, similar to sound healing work done by a skillful shamanic practitioner who can with such ease entice your mind into journeying to a place so clearly outside of itself with what seems like simple or even non-existent techniques.

This sound healing effect is also strongly present in disc 3 OPUS CREMATIO where mechanical drones vibrate so powerfully in my listening space that time is something no longer until it is disrupted by a quick transition to shoveling and static. Side B situates the listener in a wavering back and forth place somewhere between pulsing static and a warm drone where a nonphysical sense of emptiness and lack of presence is so beautifully perceived. 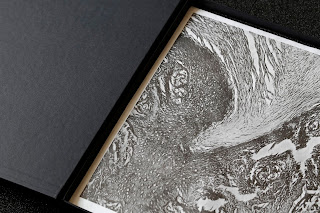 Concluding this deeply thought out and composed structure of the four LPs we find the last LP OPUS PUTESCO made up of of two tracks - decomposition internal & decomposition external, recorded at a forensic study facility with measurement microphones placed above decomposing corpses, and vibration sensors placed within the corpses. Rain and flies merge with what could be described as sounds never experienced. The listening pleasures that come from the level of artistry and skill of this LP is like a bit of cake that comes after a perfect meal. Not unlike the master field recorders and composers Yannick Dauby and Chris Watson, the construction of this final LP is like imagining a conductor guiding a large orchestra through a blissful score where the violins are flies, the percussion drops of rain, and the bass is decomposition. The lushness of the sounds discovered by Mr. Kirkegaard really boggles the mind here, like being temporarily in the mind of someone who truly hears and sees the world in a way that you know you are not capable of.

Here we are in Mid November and this release is clearly the best of 2019 for this listener. This site is really not about music/sound reviews, but here are some words that attempt to convey the feelings and emotions that Mr. Kirkegaard's set fires up within me, and why it will be amongst my favorites in the years to follow and constantly spinning and spinning on the player and traversing the walls of my memory.

*blog title suggestion in a letter by Jacob Kirkegaard
Posted by the art of memory at 12:11 PM